KUCHING: Sports tourism will get a major boost next year when Sarawak play host to the World Para Swimming Championships and the Asia Masters Athletics Championships.

He added that Kuching will make history as the first city in Asia to host the World Para Swimming Championships from July 29 to Aug 4. The event, which will be held at the Pandelela Rinong Aquatic Centre, is expected to attract 800 athletes and 400 officials from 80 countries. It will also boost Malaysia’s image in the promotion of inclusiveness and equality.

“The fans and sponsors want dedication to be shown by the players and the management, and mismanagement will only lead to disappointment. Therefore lead the team back to its glory,” he told FAS and the players.

KUCHING: Kuching City’s ability to organise major sporting events continues to gain the confidence of outsiders as next year it is entrusted to host the 21st Asia Masters Athletics Championship (AMAC) 2019 and the World Para Swimming Championships 2019.

Sarawak Tourism, Arts, Culture, Youth and Sports Minister, Datuk Abdul Karim Rahman Hamzah said the AMAC is scheduled from Dec 2 to Dec 6 at the Sarawak Stadium, while the World Para Swimming Championships 2019 from July 29 until Aug 4 at the Sarawak Aquatic Centre here.

He said the AMAC championship is expected to attract over 3,500 entries from 30 counties worldwide, and it would be the third time for the Malaysian Masters Athletic Association (MMAA) to host the championships, as it had successfully hosted it in Kuala Lumpur in 1990 and 2010.

“He knows the ground sentiments in Saratok well and, as rightly said by him, whoever aspires to lobby for that seat must have the ground support.

“It would be pointless to contest the seat just because the seat is given based on the ‘quota’ as agreed under the BN coalition, but only to lose the seat to the opposition,” said Abdul Karim through a press statement yesterday.

Apart from that, the PBB supreme council member said the zone had also agreed the two deputy president posts should be made official for Datuk Amar Douglas Uggah Embas and Datuk Amar Awang Tengah Ali Hasan, and should not be contested during the forthcoming TGM.

Pat on the back for sports event organisers

KUCHING: Hosting sport events can contribute significantly not only to the development of sports. But it is also a great tool to stimulate and drive economic as well as social and community development.

“When Sasa told me about the tournament last month, I was excited because the organiser was not only interested to promote the sports via the tournament but also to carry out charitable works via the same platform,” he said at the opening of the Arm Wrestling Championship at Premier 101 on Friday night. 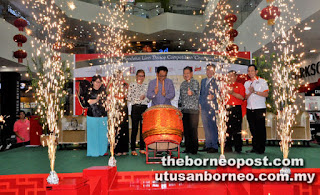 Abdul Karim (fourth left) beating the traditional Chinese drum as gimmick in officiating the 3rd Plaza Merdeka Lion Dance Competition. Accompanying him on stage are Ng (fourth right) and others.

“We should preserve this kind of culture even though Lion dances are predominantly performed by Chinese,” he said.

“I am very happy to see that the lion dance associations here make efforts to groom Bumiputras as part of their dance troupe and also train them to excel in competitions,” he added. 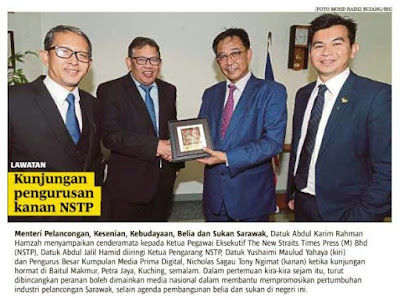 They spent an hour with Karim, who shared his plans on accelerating growth in the tourism industry, at the latter's office at Bangunan Baitulmakmur here.

The minister, in his speech at the dinner, praised Ik Pahon for his work with the ministry, describing him as a person who has vast experience and will certainly do a great job as permanent secretary of another ministry.

“Ik Pahon has been dedicated in serving this ministry.

Hii, formerly Sibu Resident prior to his transfer, said he was looking forward to take on the challenges in his new role.

KUCHING: The Ministry of Tourism, Arts, Culture, Youth and Sports is targeting 5.25 million visitor arrivals to the state this year.

Its minister Datuk Abdul Karim Rahman Hamzah is optimistic the state will be able to reach the target, considering there are more international flights from countries such as China and Indonesia to Sarawak via Kuching starting this year.

KUCHING: The Minister of Tourism, Arts, Culture, Youth and Sports Datuk Abdul Karim Rahman Hamzah called on taxi operators in the state to look at the operation of e-hailing services such as Uber and Grab holistically.

“The drop in business among taxi operators occurred not only to those in Sarawak and Malaysia but all over the world.

“When there is change in the system, where in this case customers can hail a cab to bring them from one place to another simply by using their smartphone, this will no doubt create issues for taxi operators,” he said, as reported by The Borneo Post, when commenting on the recent appeal made by taxi drivers to Chief Minister Datuk Patinggi Abang Johari Tun Openg to help them cushion the blow resulting from the operation of Uber and Grab in the state.

KUCHING: Armwrestling fans are in for a vein-bulging, forehead-sweating treat this Jan 19 and 20 as around 500 armwrestlers from over 20 countries compete in the 3rd International Charity Armwrestling Championship at Premier 101 Commercial Centre along Jalan Tun Jugah here next weekend.

Organised by the Sarawak Armsport Association (Sasa) and Premier 101 Community Club with support from Malaysia Armsport Association (MyArms) and Ministry of Tourism, Arts, Culture, Youth and Sports, the annual event is expected to be a grand affair as these armwrestlers will no doubt have the audience gritting their teeth while cheering on their favourite armwrestler.

“There are going to be around 200 international armwrestlers from countries such as the United States, Australia, New Zealand, Thailand, China, Taiwan, Japan, Russia, Kazakhastan, Vietnam, Brunei, India, Nigeria, Korea, Belarus, Indonesia, Ukraine, Turkey, Italy and the Philippines competing during the two-day event.

KUCHING: The Premier 101 Int e rnat ional Char i t y Arm Wrestling 2018 will be held on January 19 – 20, at Premier 101 Commercial Centre here. The tournament, which is the third edition since 2016, offers a total cash prizes worth RM31,300 which is the highest in Asia.

In part, it is also the biggest of its tournament in Sarawak which involved the participation of 21 countries, namely Russia, Singapore, Thailand, Indonesia, Vietnam, India, Australia, China, Brunei and others.

“There will be more than 200 athletes from overseas and over 300 athletes from Malaysia to take part in this tournament and will be coming,” said Minister of Tourism, Arts, Culture, Youth and Sports, Datuk Abdul Karim Rahman Hamzah during a press conference at Baitulmakmur in Petra Jaya here yesterday.

This result means the Asajaya assemblyman is now the branch chief for five consecutive terms since 2001.

The branch also has a new deputy chief in the person of political secretary to the chief minister Buang Bolhassan who defeated Oton Bujang to the post. 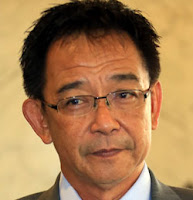 SIBU: The Ministry of Tourism Arts, Culture, Youth and Sports is looking into the requests of the people for better air connectivity for Sibu, with its minister Datuk Abdul Karim Rahman Hamzah yesterday calling on the townsfolk to be patient.

Abdul Karim said there are various matters that need to be resolved in strengthening Sibu’s air connectivity.

Abdul Karim was asked to respond to Sibu Municipal Council (SMC) chairman Datuk Tiong Thai King’s call for more direct flights to Sibu and putting an end to the monopoly of air service.