"Like the Malay saying ‘jaga tepi kain sendiri’ which roughly means look after your own house and problems. That is what I want to say to Tian Chua." Tuan Haji Abdul Karim Rahman Hamzah

He was reacting to Tian Chua’s claim that the tussle between the ‘merger of minds’ group comprising BN component parties PRS, SUPP and SPDP and BN-friendly Teras was the first sign that BN was disintegrating and losing its direction.

“I am unsure of what this ‘merger of minds’ as announced by the three BN component leaders are. They would be in better position to answer what is this merger of mind,” he said in statement to The Borneo Post yesterday.

They announced at a joint press conference that they had teamed up in defending their seats allocation in the BN from being taken over by new party Parti Tenaga Rakyat Sarawak (Teras) after 10 elected representatives from SUPP, SPDP and Sarawak Workers Party (SWP) quit their parties to join Teras on May 15.

On May 16, the 10 elected representatives met state BN chairman and Chief Minister Tan Sri Datuk Amar Adenan Satem to pledge their allegiance to the BN despite having left their BN component parties.

Last Saturday Masing said PRS was allocated by the BN nine state seats while SUPP (19) and SPDP (8) which means the three parties would be contesting in 36 seats in the next state election.

SIBU: The Barisan Nasional (BN) government practises transparency and good governance in its finances, including development funds by its elected representatives.

Dr Teo said this was necessary because the amount allocated to them annually was huge.

To this, Abdul Karim, who is Assistant Minister of Youth Development and Asajaya assemblyman, said: “We don’t play coffee shop politics like MP Teo.

“Let me reiterate that these development funds are not for the YBs personal use as ‘pocket money’ like what MP Teo seems to imply.

“There are terms, conditions and guidelines on how the monies are to be spent.

“It cannot be spent by the YBs as they like. All proposals for expenditures have to be submitted and evaluated by a certain committee for vetting and approval. The YBs can only propose.”

Karim: Is DAP trying to hoodwink the Dayaks again?


“It’s better for DAP to name their proposed CM candidate for us to evaluate his or her capability.” Tuan Haji Abdul Karim Rahman Hamzah

SIBU: State BN secretary-general Datuk Dr Stephen Rundi says what the DAP have promised to offer the Dayaks can be described as political gimmick.

“It is an open knowledge that they are trying to get the Dayaks’ support to be in power through their ‘Impian Sarawak’, and their so-called go-rural drive and so on.

“Based on past and current practices, there is no hint at all about ‘Dayaks at heart’ in DAP but merely politicking…don’t forget that majority rules.

“The first 10 days as chief minister was full of events and he showed his capability as chief executive officer of the state in riding through these events without any glitches.” Tuan Haji Abdul Karim Rahman Hamzah

KUCHING: The commitment of Chief Minister Tan Sri Adenan Satem to stave off religious and racial extremists, strong stance on Sarawak’s position in the nation, call for oil and gas 20 per cent royalty for the state and reaching out to the opposition in his first 100 days has won him a resounding endorsement from the people.

It was not only his stance on these key issues that won him the plaudits as Adenan had also proven that he could walk the talk by putting his words into action as shown by his approval of RM1 million for the medical bills of former DAP state chief Wong Ho Leng.

A survey carried out by thesundaypost showed that the new chief minister has won the approval of the people and leaders in his first 100 days in office.

Minister of Works Datuk Fadillah Yusof says Tan Sri Datuk Amar Adenan Satem has proven that he is the right man to take over from Tun Pehin Sri Taib Mahmud as chief minister.

Fadillah added that Adenan had lived up to the expectations of the people in his first 100 days.

“I’m very thankful that the people in the state have been giving great response to the chief minister’s first 100 days in office,” he said yesterday after officiating at the Datuk Fadillah Sepak Takraw competition at The Hills shopping complex.

Asajaya assemblyman Datuk Abdul Karim Rahman Hamzah said Sarawak, being a big state and a major contributor to the national coffer, deserved to be given more funds to build the needed infrastructure in many areas.

“We do not want to lag behind the other states be it in terms of roads, education, utilities, housing and others,” he said when contacted yesterday.

The motion for a hike in oil and gas royalty from the present five per cent to 20 per cent was unanimously passed in the State Legislative Assembly last month. It was a historic moment of sorts as both sides of the political divide supported the motion.

During his speech at the Malaysia Gawai Dayak Open House on Monday, the prime minister said the federal government would “give utmost consideration on this matter (request).”

Abdul Karim, who is also Assistant Minister of Youth Development, said the royalty agreement was signed in 1974, and as such it was time for a review.

“It cannot be static. On the other hand, the good federal-state government relationship and political stability need to be maintained for the state and nation to prosper. 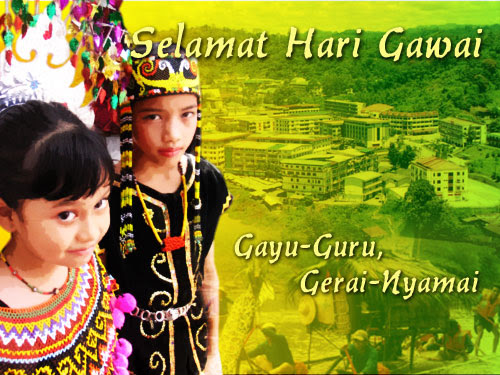