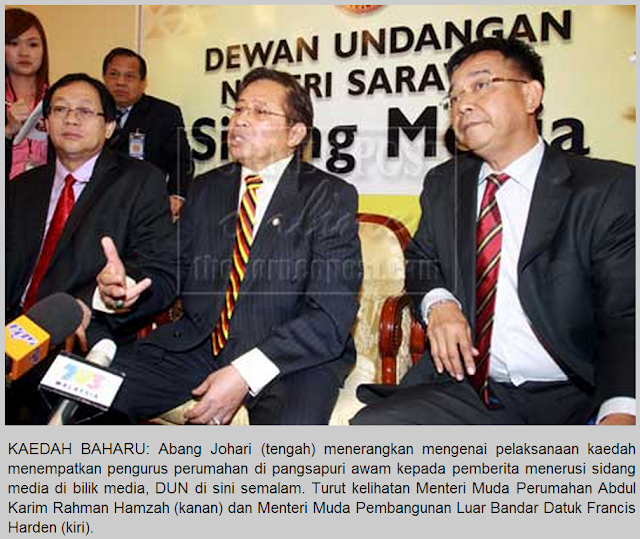 SIBU: There may be more than two ‘prime minister’ hopefuls should Pakatan Rakyat (PR) come to power after the general election as DAP strongman Lim Guan Eng will not want to be left out of the race.

When giving this view, PBB supreme council member Abdul Karim Rahman Hamzah warned that there would be a big scramble for the country’s number one post if PR had the upper hand.

“Unlike BN, PR is a loose coalition and there is no ‘head’ of PR to automatically become PM if they win the impending election.

“The likelihood of chaos cannot be discounted, where investors’ confidence and the business community are the ones most likely affected. To date, they are evasive as to who would become the premier in the event PR wins because among themselves, whether it is (Datuk Seri) Anwar Ibrahim, (Datuk Seri) Hadi (Awang) or Guan Eng, they are keen to vie for that post.

“Before that happens, it is better to put your vote on the present BN government that has proven visionary and brought continuous development to the people.

“BN has time and time proven to be capable in leading the country towards achieving higher level of development and growth besides being people and business friendly,” Karim, who is also Asajaya assemblyman and Assistant Minister of Youth Development, told The Borneo Post.

He conceded while there might be weaknesses BN was very sincere in making improvements.

KUCHING: The opposition’s move to get a foreign country to observe Malaysia’s upcoming election has been branded as “desperate”.

“How could someone stoop so low as to seek help from foreigners to meddle in our internal affairs? I hope Pakatan Rakyat supporters could see this and ask themselves that question,” he said yesterday.

He said it was ‘disgusting’ for anyone to beg another country to oversee the running and conduct of elections in Malaysia.

“That only reflects how desperate Anwar and PR are, in wanting to win the election. I wonder how Anwar can claim that elections in Malaysia are not free, when PRU12 (the last general election) saw PR winning many seats and even state governments which are testimonies of a free election.

“What Anwar did are the actions of one who has no love and loyalty to Malaysia,” added Abdul Karim, who is Assistant Minister of Housing.

Anwar is reported to have written to Australian Foreign Minister Senator Bob Carr to ask for help to ensure the next election, likely to be held early next year, is free of fraud and corruption.

SIBU: It would not augur well for Sarawakians if Pakatan Rakyat grabbed power in the impending general election and PAS president Datuk Seri Abdul Hadi Awang was appointed prime minister.

“Isn’t this the chap who belittles the native of Sarawak as still backward, still pakai ‘cawat’ or loin clothes and don’t know how to vote?”

It was reported that Hadi gave that comment after the Batang Ai by-election in 2009 following the demise of Datuk Dublin Unting.

“All Sarawakians feel insulted with that derogatory remark till today. Hadi has not apologised or retracted his remark!

“And PAS expects Sarawakians to swallow their pride and accept him as PM? No way!” asserted Abdul Karim, who is Asajaya assemblyman and Assistant Minister of Youth Development.

Meanwhile, Bernama reported that Hadi Awang welcomed PAS delegates’ suggestion that he be made PM should Pakatan come into power.

KUCHING: Sarawak’s economy is projected to expand by five per cent in 2013.

Chief Minister Pehin Sri Abdul Taib Mahmud said the growth would be supported by stronger domestic demand generated by the dynamic economic activities of on-going projects in the Sarawak Corridor of Renewable Energy (SCORE) and projects under the 10th Malaysia Plan (10MP).

“Our state economy is expected to record a favourable growth of 4.5 per cent this year,” he said when tabling the Sarawak Budget 2013 at State Legislative Assembly Complex yesterday.

Taib said the state government anticipated private investments to expand by 10.4 per cent next year, thanks to the progress made in the SCORE area as well as the Economic Transformation Programme.

“The strong growth in private investments for the first half of 2012 was also reflected in several key investment indicators.

“These include the importation of capital and intermediate goods that grew by 10.3 per cent and 19.4 per cent respectively for the period.”

Taib who is also the Finance Minister said the government would carry on putting in place the essential infrastructure facilities, improving public sector delivery and its on-going initiatives in attracting foreign and local investments.

Hadi is too arrogant to apologise for the 'cawat' remark -Karim


“Isn’t this the chap who belittled the natives of Sarawak as still backward, still wearing ‘cawat’ and don’t know how to vote? - Tuan Haji Abdul Karim Rahman Hamzah

KUCHING: Some BN leaders cannot fathom how the man who said the Dayaks are still wearing “cawat” (loinclothes) wants to be the next prime minister.

The insulting remark by PAS president Datuk Seri Abdul Hadi Awang which was made in July 2010 was still fresh in their minds.

“To us Dayaks, this (Hadi to be PM) is looking down on us and very condescending. The Dayaks, even those in the Opposition I think, would know who not to support,” SPDP president Tan Sri William Mawan Ikom told The Star yesterday.

On top of that, he said, PAS championing the implementation of the Hudud Law did not go down well with some non-Muslim communities and had caused some uneasiness even among the other Opposition leaders.

“We should see it coming. The Hudud Law would be implemented if Hadi becomes PM,” he said.

Hadi had angered Sarawak’s Iban community when he blamed PKR’s loss in the April 7, 2010 Batang Ai by-election to ignorant voters who did not know how to vote and “were still wearing loinclothes”.

Karim urges Indians to reach out to the needy


KUCHING: Assistant Minister for Youth Development, Abdul Karim Rahman Hamzah is glad to see Kuching Indian Association members reaching out to the needy in conjunction with Deepavali, which will be celebrated on Nov 13.

He said it was laudable that the Indian community, despite its small population, had emulated their Malay and Chinese counterparts in helping the less fortunate during festive occasions.

“Although there are only about 10,000 Indians in the state, many have excelled in their undertakings and are leading successful careers,” he said before presenting goodies and cash to 35 individuals at the association’s hall here yesterday.

“I am happy to see that Indians have started offering assistance to the needy and the less fortunate on their festival.”

Abdul Karim said there were people out there who needed help, and therefore it boiled down to every individual to play their role towards preserving social harmony.

Towards that end, he pledged a government grant of RM10,000 for the association to carry out its annual charity events.

SIBU: The opposition has been labelled as ‘teaching a duck how to swim’ for urging the state government to give more priorities to rural folk in term of infrastructural facilities.

PBB supreme council member Abdul Karim Rahman Hamzah said the government had all along been doing this and continued to strengthen facilities in hinterlands.

Hitting out at PKR Bintulu branch chairman Paul Raja’s call for the government to be more sensitive to problems besieging rural communities, he said the PKR leader must have been blind.

“Or rather choose to be blind or he is just ignorance of what is going on around him. Telling the state government to be more sensitive to problems and difficulties faced by locals in basic infrastructure facilities is just like telling ‘ducks how to swim’.

“This is what the state government has been doing all this years! This is what has been the vision of the Chief Minister Pehin Sri Abdul Taib Mahmud through his ‘Politic of Development’ advocated when he came to lead Sarawak from 1981,” he told The Borneo Post.

He was asked to respond to Raja’s comment that the ruling government gave less emphasis to basic infrastructure facilities such as electricity and water supplies and roads to allow the people to move about.

Abdul Karim, who is also Asajaya assemblyman and Assistant Minister of Youth Development, said Sarawak almost the size of Peninsula and hence, one did not expect the 5,000 or so villages in the state to suddenly be equipped with everything.