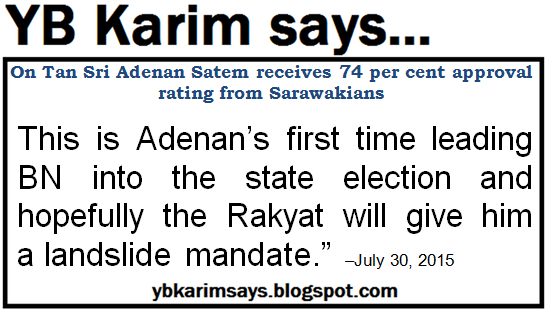 “I do agree with YB See that timing of survey does reflect the way public opinion goes.

But we cannot take away credit from our CM as everywhere we go, from coffee shops  to the villagers, from students to civil servants and those in the private sectors, from among Malays, Chinese and Dayak,  there is this “feeling” of liking for him.”

Karim added there are other national issues that could have influenced the survey like 1MDB, imposition of GST, fuel prices but somehow these issues did not negate the rating for Adenan.

See has also said despite enjoying a good rating, the Merdeka Centre survey results also showed that 56 per cent of those interviewed opined that corruption was a serious issue in Sarawak, while only 27 per cent thought that it was not serious. 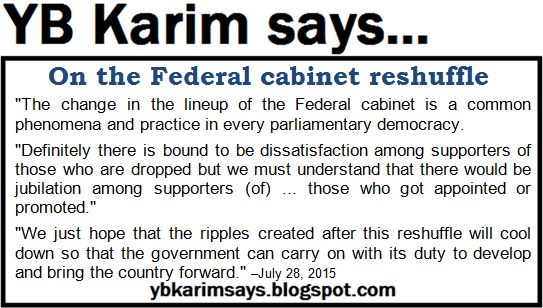 "The change in the lineup of the Federal cabinet is a common phenomena and practice in every parliamentary democracy.

The Prime Minister Datuk Seri Mohd Najib Tun Razak has the full power and prerogative to decide who and who he wants in his cabinet.

"Definitely there is bound to be dissatisfaction among supporters of those who are dropped but we must understand that there would be jubilation to supporters as well as those who got appointed or promoted," he told New Sarawak Tribune when contacted yesterday.

"We just hope that the ripples created after this reshuffle will cool down so that the government can carry on with its duty to develop and bring the country forward," said Abdul Karim

He also pointed out that the newly promoted and appointment ministers should be given time to adapt to the new environment to succeed. 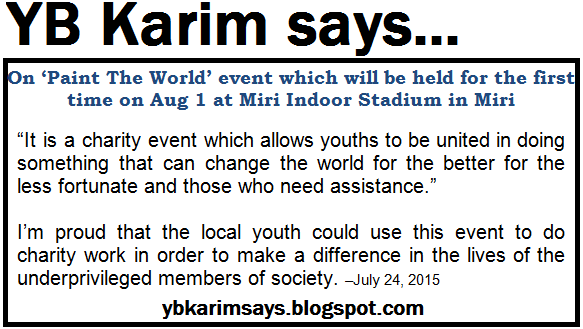 KUCHING: The state government fully supports the ‘Paint The World’ event which will be held for the first time on Aug 1 at Miri Indoor Stadium in Miri.

Assistant Minister of Social Development (Youth) Datuk Abdul Karim Rahman Hamzah said the event was an international event brought here so that our youths could bring joy and happiness to the less fortunate.

“This is a way for our youth to use their energy and to learn to give back to society, he told a press conference at his office here yesterday.

“It is a charity event which allows youths to be united in doing something that can change the world for the better for the less fortunate and those who need assistance,” he added.

Karim said he was proud that the local youth could use this event to do charity work in order to make a difference in the lives of the underprivileged members of society.

He said he was very impressed with the ways how youth of today could come together and connect themselves using social media to make something (good) happen.

“I believe there will be a lot of excitement and colourful activities carried out during the event to make it a memorable occasion,” he said. 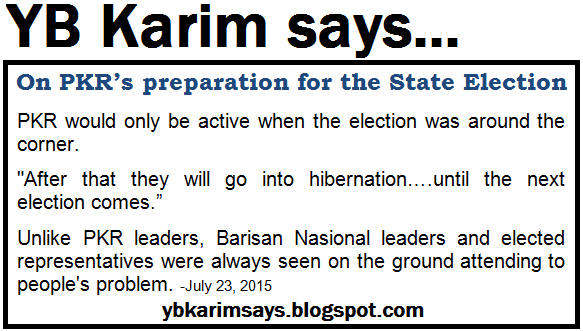 He noted the launching showed that the party has shifted into high gear for the coming state election.

“This is good as the people need to be informed of what they have to offer," he told The Borneo Post yesterday.

However, on the other hand, Karim who is the Housing and Youth Assistant Minister said, he noticed that PKR would only be active when the election was around the corner.

"After that they will go into hibernation….until the next election comes.”

He added unlike PKR leaders, Barisan Nasional leaders and elected representatives were always seen on the ground attending to people's problem.

Karim was commenting on media reports that PKR has started rolling out its state election machinery. 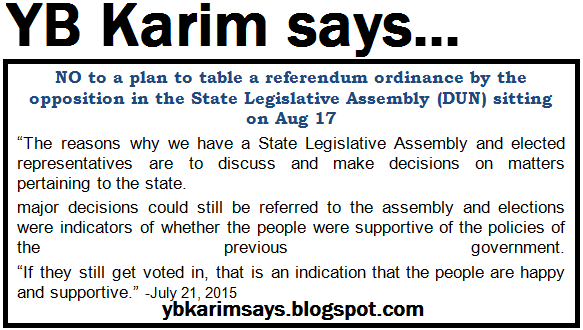 KUCHING: State Barisan Nasional (BN) leaders are of the view that there is no need for the state to have a referendum ordinance as is proposed by state DAP chairman Chong Chieng Jen.

Chong, who is Bandar Kuching MP and Kota Sentosa assemblyman, said he was ready to table a motion for a referendum ordinance in the State Legislative Assembly (DUN) sitting on Aug 17.

He said the ‘Sarawak for Sarawakians’ (S4S) organisers had been gunning for a referendum ordinance, as opposed to Sarawak’s independence.

Chong said what the referendum ordinance would do was to allow referendums to be held in respect of major decisions of any country or government.

He said there many examples of referendums held globally. In Switzerland for example several referendums were held in a year when the government wanted to increase assessment rates. 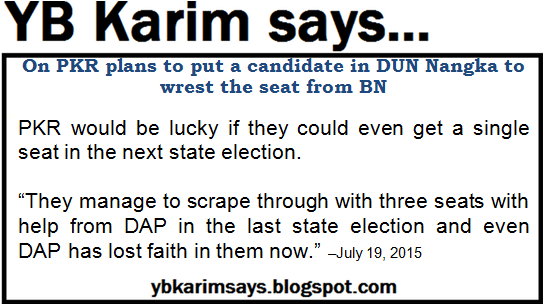 State BN secretary-general Datuk Dr Stephen Rundi said they had read PKR’s game plan in attempting to establish a support base there.

“We are fully aware of their intention and strategies and our grassroot machinery had been working extra hard to make sure Nangka remains in BN.

“We are confident that the team lead by Dr Annuar (Rapaee) will deliver the seat for BN in the next (state) election,” Dr Rundi, who is Assistant Minister of Public Utilities (Electricity and Telecommunications), told The Borneo Post yesterday.

He was reacting to PKR Sibu branch chief Abdul Raafidin Majidi’s statement that the party had put up a candidate in Nangka in the next state election to wrest the seat from BN.

Abdul Raafidin further claimed that the candidate identified had been going to the ground, especially to Kampung Hilir and Kampung Datu to assist people such as single mothers and the elderly.

The state PKR youth chief, however, added that they would probably not contest other seats in Sibu like Bawang Assan and Pelawan, giving way to DAP. 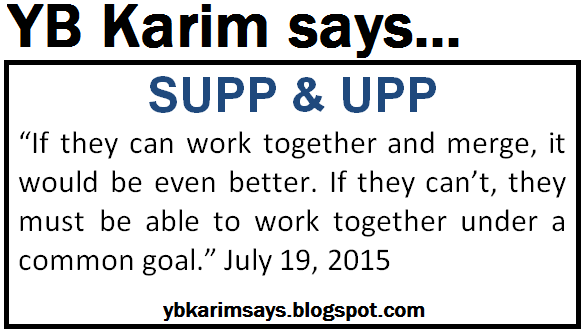 Lo, who is also UPP Batu Lintang branch chairman, during a visit to Tourism Minister Datuk Amar Abang Johari Tun Openg’s Hari Raya Aidilfitri open house on Friday, was quoted as saying that UPP is willing to compromise if SUPP agrees to do so as well.

He said this was necessary for the sake of unity in the Chinese community.

Abdul Karim, who is Asajaya assemblyman, when met at his Hari Raya Aidilfitri open house yesterday, said SUPP leaders should not look at Lo’s statement as arrogance but deem it as a good intention of wishing to see the Chinese community united.

“But I hope what the UPP secretary-general had mentioned can be taken with an open heart. Don’t look at it as being arrogant but rather as a good intention coming from him wanting to see the Chinese community united,” Abdul Karim told The Borneo Post.

He said even though he is from a different ethnic group and party, he would relish to see the Chinese community united under one umbrella. 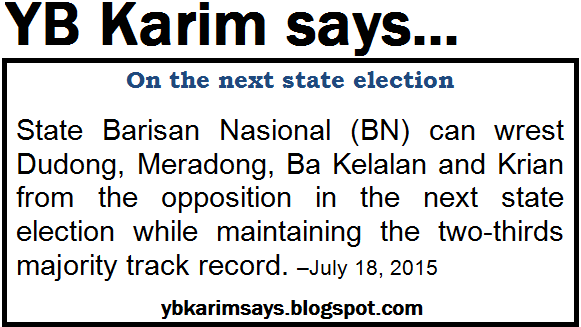 He said some of the presently opposition-held urban seats such as Dudong and Meradong that BN failed to defend in the last election was due to in-fighting in the party.

“Do not be surprised that we may be able to capture all these seats. I think DAP knows about that also,” he said when met at his Hari Raya Aidilfitri open house in Jalan Astana yesterday.

“Whether the 11 new seats are going to come into play or not does not really affect us. Personally, I see that the 11 new seats will give more leeway to the chief minister to patch up the component parties and the splinter group.

“If the 11 new seats come into play, of course the chief minister will have more space to arrange. But without those 11 new seats, we will have a landslide win also. With the new seats, we may probably lose one or two of them. It is not going to be 100 per cent ours.”

Karim predicted that the next election would be called either end of this year or early this year. 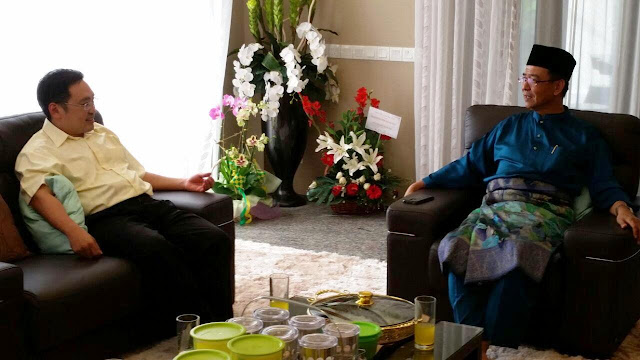 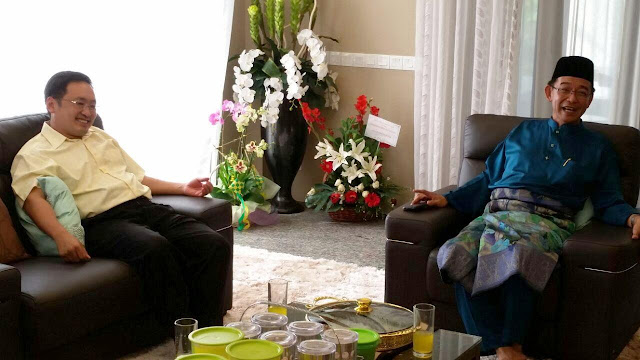 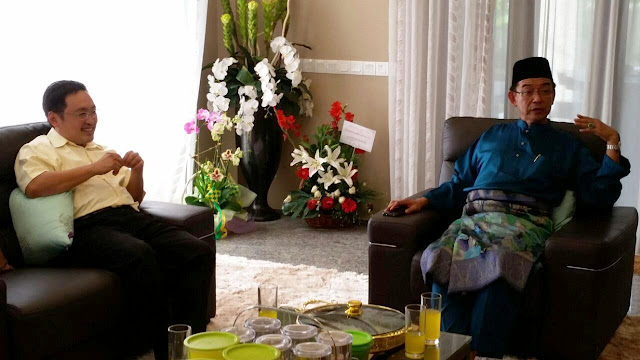 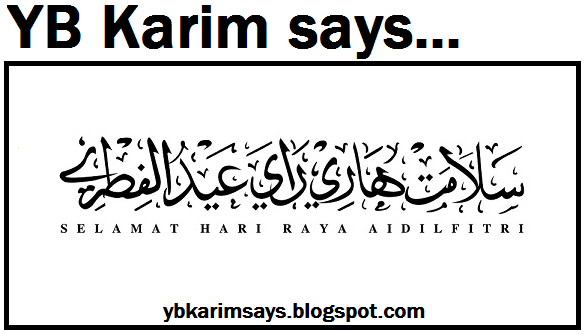 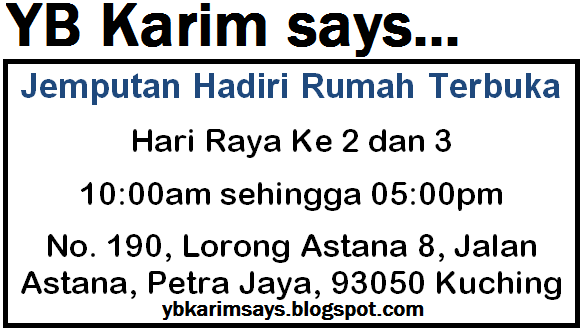 Galeri: Breaking of fast dinner with the media