‘Immigration personnel must be more vigilant at KIA’ – Abd Karim

KUCHING: A more vigilant approach must be taken at Kuching International Airport (KIA) to prevent foreigners from entering the state illegally.

In making the call, Assistant Minister for Youth and Sports Datuk Abdul Karim Rahman Hamzah, suggested that a proper signage and barriers to be put between the arrival halls of international and the domestic flights.

“Looking at the huge number of foreigners attempting to enter the state using domestic and international boarding passes, the state Immigration Department must always be on the lookout to ensure that they (foreigners) could not ‘beat the system’.

“Proper signage and barriers must be put in place so that passengers from international flights would not enter using the domestic arrival hall,” Abdul Karim, who is also Assistant Minister for Housing, said when contacted yesterday.

He was responding to the news about an attempt by 40 foreigners, who were in possession of both domestic and international flight boarding passes, to enter the state illegally, but it was foiled by Immigration Department.

Suksa back after a 27-year hiatus

KUCHING: The state Games or ‘Sukan Sarawak’ (Suksa) will return this year after a 27-year hiatus, the last one being held back in 1990.

According to Suksa 2017 chairman Datuk Abdul Karim Rahman Hamzah, the Sarawak Games will be the best venue as a prelude to unearth talent for the national Games or ‘Sukan Malaysia’ (Sukma) in 2018.

“The last time Suksa was held, we (Sarawak) were the (Sukma) champions and I believe Suksa will be the platform to showcase the capabilities of our talents,” said Karim.

‘NO’ to a blanket imposition of curfew on children


SIBU: Imposing a blanket curfew for all kids is not right, said Assistant Minister for Youth and Sports Datuk Abdul Karim Rahman Hamzah in reacting to the Home Ministry’s (KDN) call for state governments to ban children in their early teens from loitering around city areas, roads and certain locations late at night.


According to Nur Jazlan, the curfew should be imposed by state governments so that owners of sites, locations or premises do not allow under-age teenagers from coming to these places late at night.


On this, Abdul Karim, who is Asajaya assemblyman, said: “I can’t see this curfew for state government to impose as proposed by the deputy minister as logical.


“We are all very sad with the tragic incident involving these young kids and we hope it will not recur, but having a blanket curfew for all other kids because of this tragic incident is not an appropriate solution.

Jamilah’s landslide win a ‘thank you’ to Adenan, says party 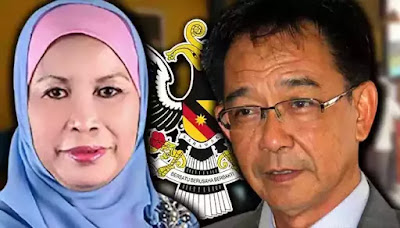 Adenan was Tanjong Datu’s elected representative for more than nine years, having first won the seat in the ninth Sarawak state election in May 2006.

“The big win is also a clear manifestation and endorsement of Tanjong Datu voters towards Sarawak BN,” Karim said.

He added that although BN knew they would win the seat, what wasn’t expected was the margin of victory, with BN getting 96.5% of the votes. 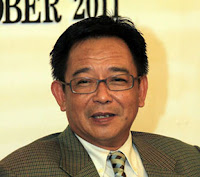 “However, I have yet to study this proposed amendment and do hope it could curtail online gambling,” Abdul Karim, who is Asajaya assemblyman, told The Borneo Post yesterday.

He also pointed out that there is a need to update the Act to cope with the technological advances as it is difficult to check and trace online gambling.

Cut out self interest, look at wider picture — Karim

KUCHING: Assistant Minister of Youth, Sports and Solidarity Datuk Abdul Karim Rahman Hamzah feels that organisers of swimming competitions should not harbour self interests but instead look at the wider picture for the sake of swimming development in Sarawak.

“I know some people are not very happy with me for interfering with how this tournament is being managed. I am very very sorry for that but I don’t have any interest … none of my children is competing in this tournament but I just want to see swimming to grow up and I don’t want to see politics inside swimming where some people are barred from competing just because they are not the affiliates.

“The pool is a place where the swimmers can compete among themselves and win because they have trained hard for it and not win by technical knockout,” he said at the closing of the 44th Sarawak Age Group Swimming Championship at the Sarawak Aquatic Centre, Petra Jaya yesterday.

“A lot of things has happened before the start of the competition and I have to congratulate Kota Samarahan Swimming Association (Kotas) especially its president Alice Kwon for a job well done.

“I know the organising committee had to face a lot of stress as it is organised during Chap Goh Meh especially those who are celebrating the Chinese New Year,” he added. 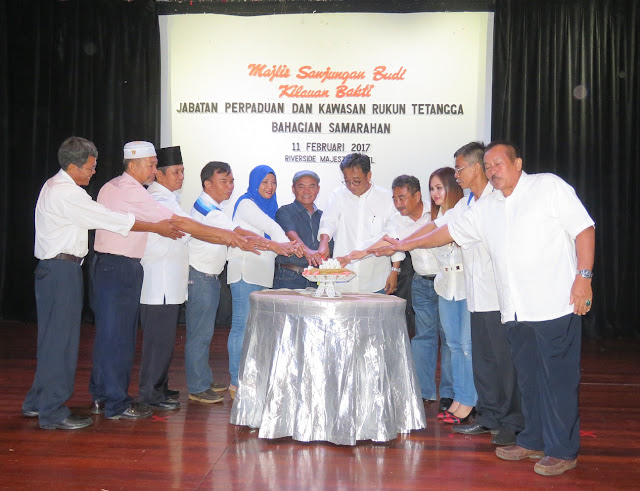 Tanjong Datu voters will not be easily swayed by STAR 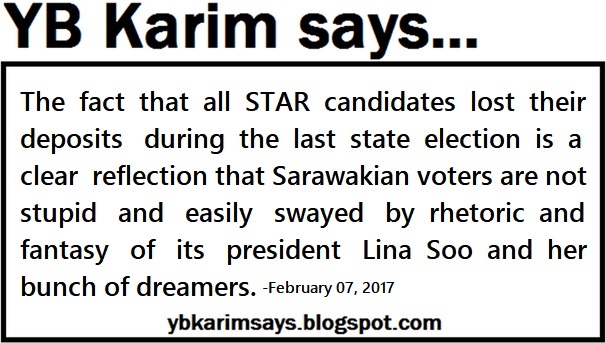 KUCHING: A PBB Supreme Council member Datuk Abdul Karim Rahman Hamzah said the fact that all STAR candidates lost their deposits during the last state election was a clear reflection that Sarawakian voters were not stupid and easily swayed by rhetoric and fantasy of its president Lina Soo and her bunch of dreamers.

“She claimed MA63 is the core agenda of STAR in the last state election and this by-election.

Well said by Lina but not very well received by Sarawakian voters in the last state election and God willing, also in this by-election,” said Karim Hamzah as reported by The Borneo Post today.

Meanwhile State BN youth chief Datuk Seri Fadillah Yusof said with or without the by-election, the government had implemented various developments that had been promised to the people in Tanjong Datu.

“Our former chief minister (the late Datuk Patinggi Tan Sri Adenan Satem) had tabled a plan for Tanjong Datu, what has been achieved with more planning for the people. 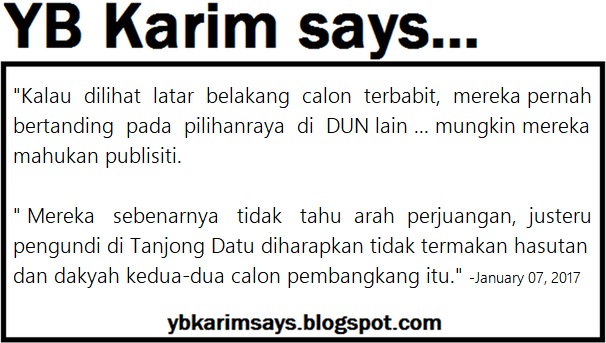 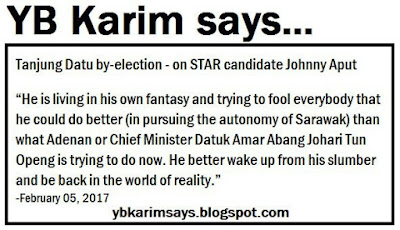 Among others, STAR candidate Johnny Aput’s manifesto focuses on the autonomy of Sarawak based on the Malaysia Agreement 1963 which he claimed the late Datuk Patinggi Tan Sri Adenan Satem was too slow to pursue.

PBDS Baru candidate Rapelson Richard Hamit, on the other hand, said his main area of contention is the recognition of ‘pemakai menoa’ and ‘pulau galau’, which was ruled by the Federal Court recently as having no force of law.

Abdul Karim, without mincing his words, said Johnny probably thought he had an ‘Alladin Lamp’ that could expedite the state’s quest for greater autonomy.

“He better be ‘down to earth’ than to live in his own dreamland. Even if he wins the seat, which is near impossible, his sole voice will not even be heard by Kuala Lumpur. He can’t even open the doors of Putrajaya.

KUCHING: Sarawak will host the 3rd South East Asia Squash Championshipship 2017 at the squash courts from Feb 14-18, in a big leg-up for sports tourism as the state has been chosen as venue for yet another hallmark sport event.

Assistant Minister of Youth And Sports Sarawak Datuk Abdul Karim Rahman Hamzah said that this will be the first time the prestigious event is being held in Malaysia and Sarawak was given the honour to become the host.

“The first event was hosted by Singapore in 2015 and they won the championship and in 2016 it was held in Myanmar and Malaysia won,” he said at the press conference on the championship held at Stadium Negeri Sarawak, here yesterday.

‘Need to educate students on danger of drug abuse’

KUCHING: The number of drug and substance abuse cases involving students is low but the problem must nevertheless be nipped in the bud before it becomes serious.

Chairman of Malaysian Drug Prevention Association (Pemadam) Sarawak Datuk Abdul Karim Rahman Hamzah said there was the need to reach out further to educate students and youngsters on the danger of drugs.

“However, we have yet to move beyond Kuching and Samarahan due to budget constraints. We are aware that there are such cases in Bintulu, Limbang, Lawas, Pusa and Beladin,” he said.

Abdul Karim, who is also Assistant Minister for Housing, said this during a courtesy call on Minister of Welfare, Women and Community Wellbeing Datuk Fatimah Abdullah at her office here yesterday.

He said most of the incidents in schools were related to substance abuse such as sniffing glue and misusing prescription drugs like Nospan (common drug used for the treatment of cough, cold and other respiratory tract disorders). 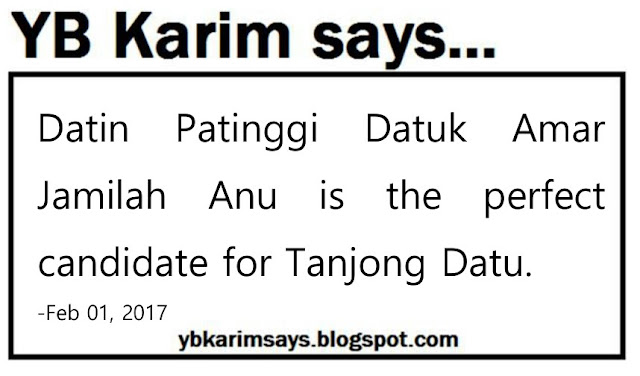 Abdul Karim, who is Asajaya assemblyman, said Jamilah was the pillar behind the late Datuk Patinggi Tan Sri Adenan Satem and she herself was very passionate and committed in whatever task she did.

“Therefore, playing the role of an elected representative, in the event she wins (in the coming by-election) will fit her well,” he said in a press statement received here yesterday.

According to Abdul Karim, Jamilah had been involved in community and charitable works ever since Adenan was the elected the people’s representative of Muara Tuang way back in the late 1970s, 1980s and 1990s.