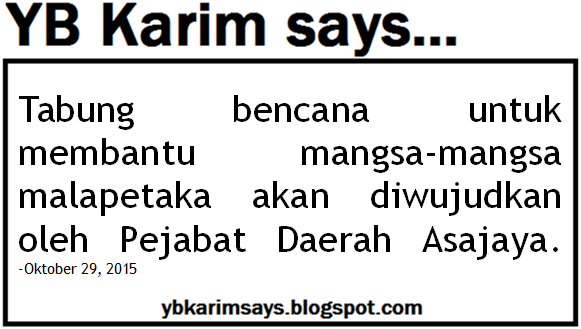 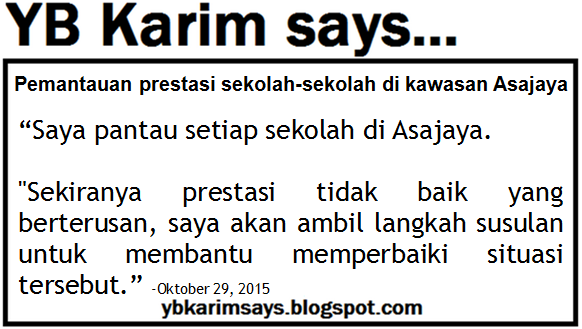 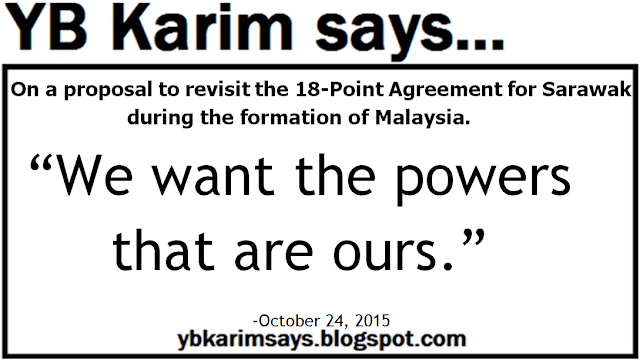 KUALA LUMPUR: A formal committee, comprising representatives from the federal and state governments, has been proposed to revisit the 18-Point Agreement for Sarawak during the formation of Malaysia.

Housing Minister Datuk Amar Abang Johari Tun Openg said the proposed committee would study what had been agreed under the Malaysian Agreement signed in July 1963.

“For that, the bonds between Malaysia and Sarawak must be strong,” he said at the Lan Berambeh Anak Sarawak 2015 Forum attended by thousands of Sarawakians at the Putra World Trade Centre (PWTC) yesterday.

Abang Johari pointed out that the 18-Point Agreement was based on the Nine Cardinal Principles of the Rule of the Rajah — that Sarawak was an independent state ruled by locals.

“This was agreed upon among North Borneo, Sarawak, Singapore and the Federation of Malaya before the Malaysian Agreement was signed on July 9, 1963 in London,” he said.

Abang Johari said Sarawak wants a return of autonomy in certain areas, citing Article 95 of the Malaysian Constitution, as well as autonomy in taxation. 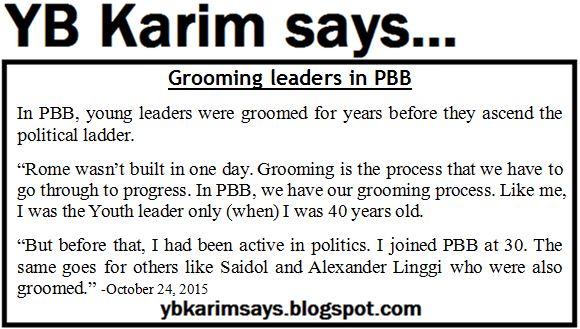 He said “one or so of those sitting from across us in the Dewan (State Legislative Assembly) are in their 20s and elected because of sentiments, yet they don’t know the procedures and how the laws are made.”

In PBB, he said young leaders were groomed for years before they ascend the political ladder.

“Rome wasn’t built in one day. Grooming is the process that we have to go through to progress. In PBB, we have our grooming process. Like me, I was the Youth leader only (when) I was 40 years old.

“But before that, I had been active in politics. I joined PBB at 30. The same goes for others like Saidol and Alexander Linggi who were also groomed,” he said at the Lan Berambeh Anak Sarawak 2015 Forum at Putra World Trade Centre here yesterday.

Housing Minister Datuk Amar Abang Johari Tun Abang Openg, who was also a panelist at the forum, said PBB had 10 new candidates in every election.

He pointed out that the party always paved the way for the younger generation who could succeed in what their predecessors have achieved. 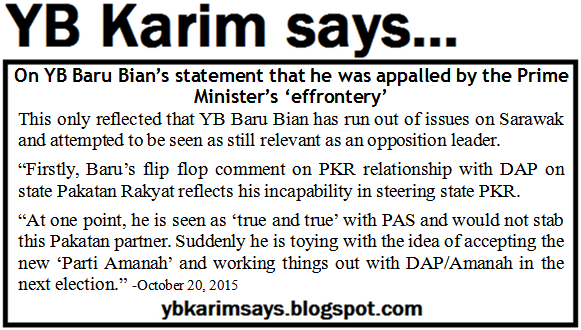 Abdul Karim, who is Asajaya assemblyman, said this only reflected that Baru had run out of issues on Sarawak and his attempt to be seen as still relevant as an opposition leader.

“At one point, he is seen as ‘true and true’ with PAS and would not stab this Pakatan partner.

“Suddenly he is toying with the idea of accepting the new ‘Parti Amanah’ and working things out with DAP/Amanah in the next election.”

He was commenting on Ba Kelalan assemblyman’s statement that he (Baru) was appalled by Najib’s effrontery in continuing to make statements, which he claimed the ‘rakyat’ (people) were tired of hearing and which only the most gullible die-hard Barisan Nasional (BN) supporters would believe.

Abdul Karim said Baru had now run out of issues against state BN and the chief minister and had resorted to ‘attacking’ Najib. 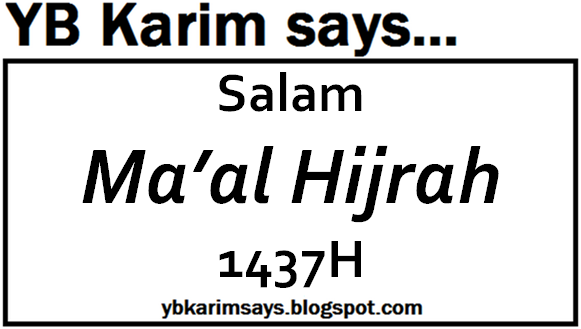 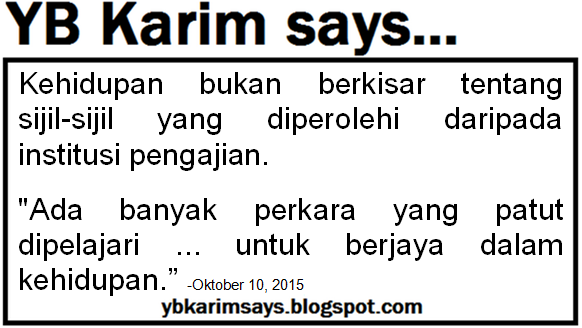 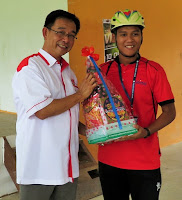 Villagers told to use vacant land for profit-making ventures 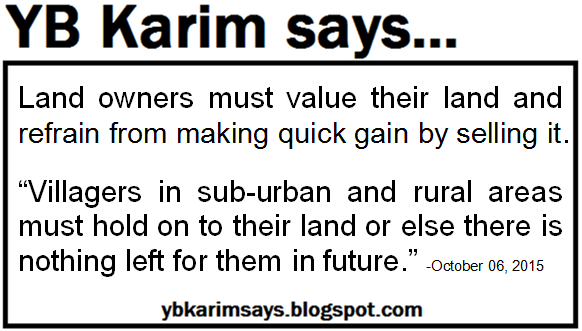 KOTA SAMARAHAN: Land owners in the state are advised to turn their vacant lands into profit-making ventures such as plantations or participate in government projects as beneficiaries.

“Villagers in sub-urban and rural areas must hold on to their land or else there is nothing left for them in future,” he said at the meet-the- people session at Kampung Empila, some 30km from here, yesterday.

He said the state government had in the past granted land to villagers hoping it (land) would be used as a profit-making platform.

However, as the years went by, the land, he said, were sold off to people outside the village causing most of them (land) to be left vacant and undeveloped.

“They are what I call ‘absentee land owners’ as they are not from the village and are living in other places such as Kuching or Sibu,” said Abd Karim, who is also Asajaya assemblyman.
Read more »
Posted by YB Karim says... at 9:54:00 am No comments: 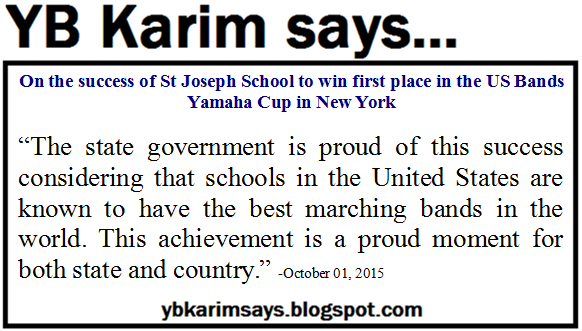 KUCHING: St Joseph School did the state and country proud when its marching band took first place in the recent US Bands Yamaha Cup in New York.

Assistant Minister of Youth Development (Urban Areas) Datuk Abdul Karim Rahman Hamzah hopes that each and every member of the winning band will emulate this feat to achieve success in other fields and aspects of their lives.

He added that for the state with a population of only 2.4 million people to be able to achieve this kind of international success is no easy feat, especially considering that the competitors were of world standard.

He said what the school had achieved was not only their success but something that the whole nation could cherish, because it put Sarawak and Malaysia on the world map.

“The state government is proud of this success considering that schools in the United States are known to have the best marching bands in the world. This achievement is a proud moment for both state and country. Hopefully they can achieve success in other fields as well,” Karim told a press conference at Kuching International Airport (KIA) here on Thursday evening, during a welcoming ceremony for the band.

The band emerged champion in the Division III A category after scoring 90.1 following a stellar performance at MetLife Stadium at East Rutherford in New Jersey on Sept 26. They also swept all caption categories including the highest scores for visual, music, overall effect, percussion and colour guard to upstage 53 other top high school bands.

KUCHING: The Kuching International Bike Week (KIWB) 2015 has indeed placed the state in the eyes of the world.Assistant Minister of Housing Datuk Abdul Karim Rahman Hamzah said such occasion with such huge magnitude had certainly benefited the state.

With the support of various agencies as well as the patron Chief Minister’s wife Datin Patinggi Dato Hajah Jamilah Anu, the event would not be amplified as it is, said Karim during the KIBW 2015 appreciation dinner held at Riverside Majestic Hotel, last Wednesday.

The success of this event has made its mark, in which KIBW will be gazetted as a biennial event in the Sarawak Tourism Calendar.He expressed his gratitude towards all parties who had contributed in making the event a success.

“Two years from now bikers will once again gather for the KIBW 2017.”

“Keep on riding,” he stated.

Meanwhile, during the event a total RM32,000 was presented to the Sarawak Heart Foundation courtesy of Alex Wong (Sarawak Bikers).