KUCHING: Chief Minister Tan Sri Abdul Taib Mahmud has announced his full Cabinet line-up, keeping all the existing ministers in their respective portfolios in a concerted effort to improve and accelerate service delivery in the state.

All the existing assistant ministers are not affected in the reshuffle as they have also been retained in their respective portfolios.

The reshuffle yesterday, done five months after the state Barisan Nasional was returned to power, saw seven new assistant ministers appointed to fill up posts made vacant after the state election in April.

Taib said the role of the Senior Ministers was to cordinate and supervise the changes set to take place in the various ministries.

He said he had decided to keep all the experienced ministers in their respective portfolios because he wanted them to continue supervising the machinery of the government under their ministries as well as the new assistant ministers.

KUCHING: The state cabinet reshuffle that will take effect on Friday will see a new ministry being created, five ministries renamed and seven new faces including a woman to be appointed as assistant ministers.

“The other new faces as assistant ministers are Julaihi Narawi, Abdul Karim Hamzah, Datu Len Talif Salleh, Dr Jerip Susil and Liwan Lagang,” he said, adding that the seven would be sworn in on Friday.

“All the full ministers will be retained and some of their ministries renamed,” he said.

He told The Borneo Post here yesterday that he did not quite agree with the Asajaya assemblyman’s view as reported in the newspaper.

“When YB Karim said Pahon’s statement must be seen from the right context he has to first of all remember that DBNA is a non-political organisation and therefore the leaders are not supposed to mix the association with politics.

“Because of that Pahon’s statement can never be seen from the right context. It is already wrong in the perspective of DBNA when the association, under its constitution, is supposed to be non-political,” he said.

He said under the DBNA constitution the objectives of the association were to promote unity, mutual help, cooperation, understanding and friendship among the Bidayuh community, foster cooperation and goodwill with other races, inculcate self-reliance among Bidayuhs and encourage them to raise their standard of living.

“Other objectives are to instill among the community a sense of devotion and undivided loyalty to the country, to promote the spiritual, mental, physical and social well-being of its members and the community as a whole, to encourage Bidayuhs to take full measure of responsibility in civic affairs and to participate actively in nation building; and to work in close cooperation with the government and other relevant agencies for the welfare and socio-economic progress of the community,” he said in quoting the DBNA constitution.

Wishing to be known as Sukuh Manggeng, he said Pahon’s statement that the three incumbent Bidayuh MPs should give way to young blood was not only wrong in his capacity as president of DBNA but also against the general orders in the civil service. 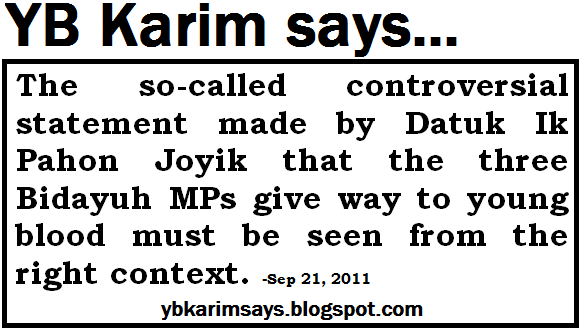 KUCHING: The so-called controversial statement made by Datuk Ik Pahon Joyik that the three Bidayuh MPs give way to young blood must be seen from the right context, said chief political secretary to the chief minister Abdul Karim Rahman Hamzah.

He pointed out that when the statement was made, Ik Pahon did it in his capacity as the president of Dayak Bidayuh National Association (DBNA) and not as a senior civil servant.

“Surely DBNA members should be proud to have a president who is outspoken and not condemn him (force him) to seal his lips just because he is a civil servant.

If that is what the (DBNA) members want, then amend the DBNA constitution to forbid civil servants to hold office in DBNA because by him holding office and barring him (Ik Pahon) from commenting on Bidayuh affairs will not help the community,” he said when contacted yesterday.

Ik Pahon, who is the permanent secretary to the Ministry of Tourism and Heritage, recently caused a stir when he said it was high time that the three Bidayuh MPs give way to young persons.

Abdul Karim said he regarded the comment as being made sincerely in his (Ik Pahon’s) capacity as DBNA president.

“Nobody should be emotional about it.

KUCHING: Malaysians from the peninsula have been asked to visit Sarawak more often so that they get to know the people here better.

Abdul Rahman Karim Hamzah, the political secretary to the Chief Minister, said some wrong perceptions of the state and its people remained a thorny issue because of the lack of traffic between Sarawak and the peninsula.

He said it was unfortunate that there were Peninsular Malaysians who believed that Sarawakians were living on trees.

He said the reason for the misperception was because these Peninsular Malaysians never visited the state.

“Believe it or not, we still get questions like if Sarawakians are still living on trees from some of our Semenanjung brothers and sisters. These people still perceive Sarawakians as so backward that we don’t even know how to build houses.

“However, as you can see for yourself, we are developing well just like any other states in the peninsula,” he said at a Hari Raya gathering for a group of visitors representing several neighbourhood watch committees from the peninsula here on Sunday night.

The programme was organised by the National Unity and Integration Department as a platform to get participants to see how the state was shaping up.

Welcome tinged with caution to repeal of ISA 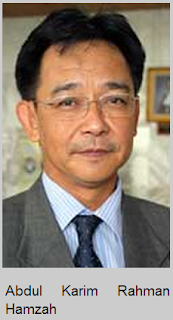 KUCHING: The announcement on the abolition of the Internal Security Act 1960 (ISA) by Prime Minister Datuk Seri Najib Tun Razak last night received mixed reactions from local law makers from both sides of the political divide and a human rights activist.

Chairman of the state BN Backbenchers’ Club and the chief political secretary to the chief minister Abdul Karim Rahman Hamzah said he was unsure whether the abolishment of the restrictive law was a right move or not.

“For a multi-ethnic and multi religious country like Malaysia, we surely need restrictive laws like the ISA but what is important is that the usage of these laws must be purely against those who pose security threat to the nation and not against political opponents,” Abdul Karim told The Borneo Post here last night.

“We welcomed the announcement as it was really high time, such draconian laws should have been abolished long time ago as our country has achieved its independence for almost 50 years,” he said.

Baru who is also the Ba Kelalan assemblyman also stressed that there were still laws such as those under police custody where abuse could still take place.

“So we have to wait and see the outcome of the announcement,” he said.

KUCHING: Dato Sri Mahmud Abu Bekir Taib is a capable individual to perform as a member of parliament for Kota Samarahan if he is nominated in the next general election.

According to Chief Secretary to the Chief Minister, Abdul Karim Rahman Hamzah, Mahmud as a corporate figure will be able to carry the responsibilities of an elected representative well.

Answering a question by a reporter during his Hari Raya open house at Jalan Astana yesterday, Karim said claims made by certain individuals that Mahmud will not perform, just like his brother Dato Sri Sulaiman Taib, is unfounded.

“In my opinion, each individual has his own style. We cannot generalise,” he said.

Karim, who is state Barisan Nasional backbenchers chairman, said each individual is different.

“Take, for example, the political scenario in Sarawak, the State Legislative Assembly (DUN) speaker Dato Asfia’s brother is in the opposition,” he added. Therefore, Karim said it is not fair to look at Mahmud in the same light as Sulaiman who might have his own personal issues and could not perform in serving the people in his full capacity.

“However, Kota Samarahan is developing rapidly from various efforts between BN and community leaders, and the result itself is important,” he said. On the question of the risk taken if nominating Mahmud who does not reside in Sarawak, Karim said the news has not been confirmed and no official statement has been made.

Karim: Bekir is not the only one fit for Kota Samarahan

KUCHING: PBB has many good candidates to contest in Kota Samarahan in the event that incumbent Datuk Seri Sulaiman Abdul Rahman Taib decides not to seek re-election in the next general election.

“I don’t mean to be arrogant but I’m sure when we face the parliamentary polls, the majority can easily be in five-digit figure. Kota Samarahan is Barisan Nasional’s bastion,” he told reporters at his Hari Raya Aidilfitri open house.

It was recently reported that Bekir, a corporate leader, had stated his intention to be a politician.

A member of PBB, since he was 19, he had also said he hoped to get his father’s blessing for his move into politics.

Taib did not mention where his son would contest in the coming general election although it is speculated that he would replace his brother Sulaiman in Kota Samarahan.

Karim: PBB not scared of opposition candidate in Kota Samarahan

KUCHING: Voters in Kota Samarahan are certain to show the opposition the exit door come the next general election.

Chief Political Secretary to the Chief Minister Abdul Karim Rahman Hamzah said this is because Kota Samarahan is a stronghold of Barisan Nasional (BN) and will always remain that way.

“PKR, PAS, DAP or whoever are keen (to contest in Kota Samarahan) can try their luck there. We are prepared for anybody,” he said when contacted yesterday.

He said PBB was not scared by news that the opposition was keen to field its candidate there because the party had contributed a lot to the development of the parliamentary constituency.

“PKR, PAS or DAP contributed nothing to the development of Kota Semarahan except instigating the rakyat there to go against the government, creating suspicion among the races and demonising our leaders.

“The rakyat in Kota Samarahan do not welcome the opposition and come the general election, they will show the door to them,” he said.

Last Saturday, state PKR vice chief See Chee How said there was a possibility that Hussain Abang Apok, who contested under the party’s banner in the last state election, would contest in Kota Samarahan.