I am echoing the stern warning by our Assistant Minister of Infrastructure and Ports Development, Datuk Julaihi Narawi to Bumiputera contractors in Sarawak who must comply and complete all government projects on time or face termination.

It goes without saying that the “inefficiency” of our Bumiputera contractors may hinder economic progress because our state government had given them the opportunities when it comes to awarding contracts for government projects. Thus, they must prove their ability to accomplish the tasks in hand and do not be a rotten apple.

I share the same views and comments with Datuk Julaihi on the unsatisfactory pavement rehabilitation works for PA-1 Kota Samarahan-Sadong Jaya Section 1 and Section 2 coastal road project which had received numerous complaints from local folks and also Netizens.

For the record, the 12.3km upgrading project was contracted at RM11.8 million and works commenced on February 4 last year but completion date was revised and is scheduled on February 19 next year. The project is under the purview of the State government with JKR and Coastal and Second Trunk Road Unit (CSTRU) appointed as superintending officers.

Among the scope of works include survey works and setting out road alignment before and during construction, ground treatment and shoulder widening, site clearance, grubbing and earthwork turfing, supply and installation of necessary road furniture and others.

Once completed, the road will be one of the main arteries for the costal road network linking to several new bridges to improve socio-economic activities and pave the way for other development for coastal areas. 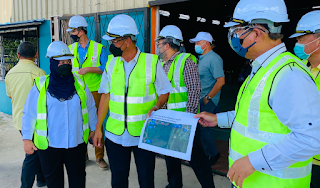 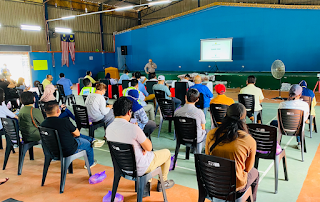 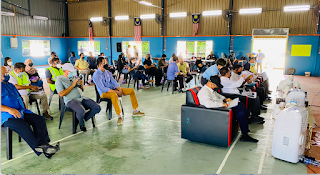 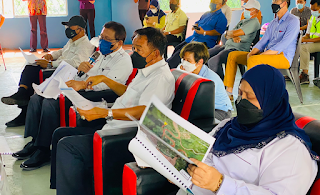 According to the contractor, the delay in delivering the project was due to Covid-19 pandemic and also the shortage of manpower needed in the construction works of roads which are experiencing heavy load of traffic including lorries and passenger vehicles.

I expressed my personal views that the next state election might be held anytime this year following several speculative stories on the official announcement that might be made by our Chief Minister possibly tomorrow if not today. We can feel what the media is feeling. The excitement is that we may be hearing the announcement of the DUN dissolution and what not, this one or two days.

Separately, our Chief Minister Datuk Patinggi Abang Johari during his function held in Sri Aman today had also appealed for our media friends to wait for "one or two days" whilst determined not to be committal on the exact date of the dissolution of Sarawak's DUN.

Being the Chairman of Gabungan Parti Sarawak (GPS), the Chief Minister had preferred to leave the matter to the Yang DiPertuan Agong as only His Majesty has the power to lift the on-going Emergency Order (EO) before its expiry on Feb 1 2022 to pave way for the state polls. On the same note, the Chief Minister Office (CMO) had also issued a statement the media fraternity not to speculate on the state's DUN dissolution date because so far there was no meeting on such matter. 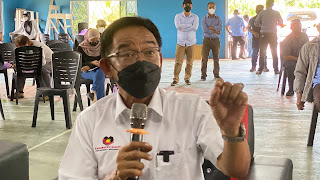 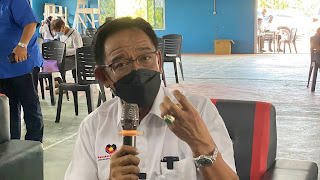 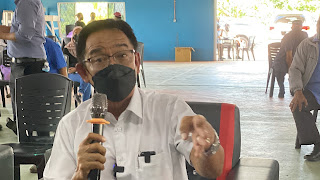 Recently I have described Parti Sarawak Bersatu’s (PSB) public debate challenge to Gabungan Parti Sarawak (GPS) on when is the safest time to call an election as mere “cheap publicity”. They have failed to understand that whatever it is, Sarawak is in a state of Emergency and unless and until the Emergency lapses or is lifted, any election cannot be held in the State of Sarawak.

Speaking as the vice president of Parti Pesaka Bumiputera Bersatu (PBB), I have mentioned for GPS, it does not matter whether the state election is held soon or later and I have also pointed out that GPS will be ready when the time comes for a fresh mandate from the people is needed.

I have urged PSB to reveal what was their ultimate goal in ‘spinning’ stories. It seems that PSB knows when the state election date will be when they challenged GPS to a debate, when even the GPS doesn’t know when it would be held and also does not have any indication on when the date will be. 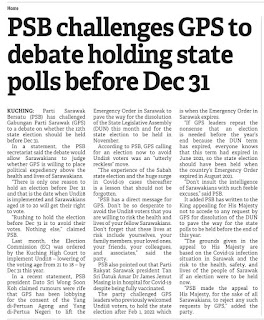 Thumbs up for the newly announced Heritage, Arts and Culture Facilitation Fund

We thank our State Government and Chief Minister of Sarawak for the newly announced Heritage, Arts and Culture Facilitation Fund which has RM10 million worth of grants and assistance to those involved in the creative arts industry in Sarawak.

Our Ministry of Tourism, Arts and Culture will therefore be looking into rolling out grants and assistance to local creative arts members in Sarawak and we will see on how the funds can be disbursed out as well on who can apply and be entitled to the funds. We are still looking into it because it has just been announced. The setting up of the fund had reflected on the state government’s concern and support towards the state’s heritage, arts and culture by putting aside a certain amount to be given out to those in the industry.

Our Chief Minister, Datuk Patinggi Abang Johari Tun Openg had announced this in his Sarawak Budget 2022 statement held on October 12 and the state government is also looking to help traditional hand-woven textile weavers in Sarawak to go mainstream and participate in the fashion world.

As handlooms are still in existence in Sarawak and thriving, the local cottage industry should get the support it needs as the people of Sarawak are well known for such wonderful unqiue crafts. The Ibans and Malays communities take pride in their heirlooms such Pua Kumbu, Songket, and Keringkam, with many local folks are still practising traditional techniques on traditional equipment.

I have noted locally organised events such as "Tenun Fashion Week 2021" are serving as good platforms to promote Sarawakian hand-woven textiles and thus, our local weavers should find innovative ways to promote their handiworks. For the record, Tenun Fashion Week 2021 was jointly organised by the Asean Handicra Promotion and Development Association (Ahpada) and Tanoti, and supported by Ministry of Tourism, Arts and Culture Sarawak (MTAC) and Maybank Foundation through its Maybank Women Eco Weavers Programme.

The transformation of the products is impressive and I have the utmost respect for the weavers who dedicated towards preserving the knowledge and skills of their ancestors, yet brave enough to experiment, innovate, and commercialise their textiles.

It was a pleasure for me to meet our Pua Kumbu master weaver, Puan Bangie Embol from Rumah Gare Tinggang in Sungai Kain, Ulu Kapit, who has achieved international acclaim for her work Bangie had led her longhouse folks through the rituals and practice of pua kumbu weaving and invented natural dyes from plants found in the forests, armed only with mentorship from a line of master weavers. 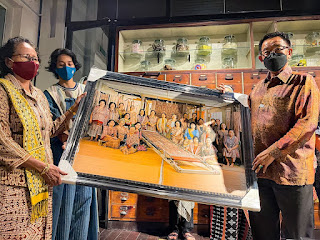 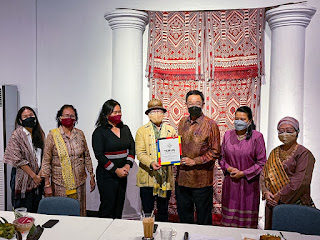 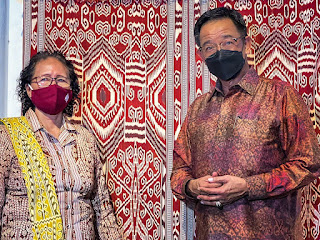 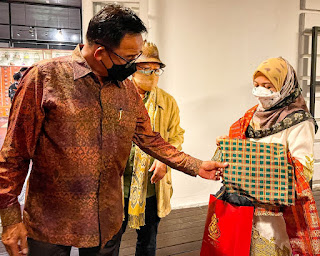 The grand opening of our new Borneo Cultural Museum is expected to be opened to the public by the first quarter of 2022 and it deserves such an event where members of the public would be able to enter the beautiful building in large numbers.I have mentioned this to our media friends who seek on the opening date of the new museum building which was supposed to have been opened by the end of 2020 but the plan was put on hold due to the Covid19 pandemic.

I have also mentioned that it will take time for the museum to be opened because it needs to be filled with artifacts and specimens whereby the Covid19 had made the relevant processes a bit slow because those involved in this are not only from Sarawak, but outside of Sarawak as well. However, we are in the final stage in doing all the necessary arrangements and still waiting for a date also from the authorities concerned. 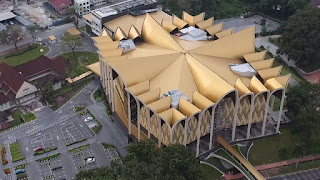 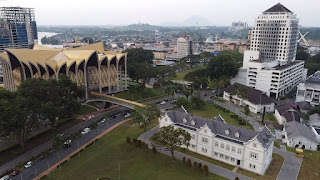 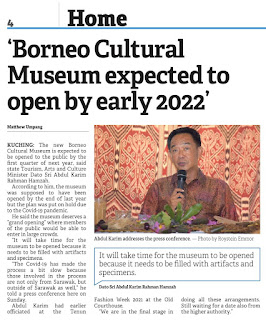