KUCHING: Assistant Minister of Youth Development, Datuk Abdul Karim Rahman Hamzah is dismayed with the incident where eight school boys in Sibu were caught with ‘ganja’ in a school bag.

He said the incident showed drug usage in the state had crept into schools.

“I’m sad to hear the latest case of the eight school boys caught with drugs which reflects the state of drug usage in the state and it may not be an isolated case,” Abdul Karim said in a texted message recently.

He hoped this was not just the tip of the iceberg.

He was commenting on a case at a secondary school in Sibu, where six Form 3 students and two Form 4 students were found inside a toilet – one of them with ganja in a school bag.

KUCHING: The opposition has been called on to stop pouring cold water on the ongoing negotiations between the state government, Petronas, and the federal government on Sarawak’s oil and gas rights.

Speaking to thesundaypost yesterday, Abdul Karim, who is a Parti Pesaka Bumiputera Bersatu (PBB) supreme council member, said the state government was still negotiating on other areas, which it felt were pertinent for review.

These include opportunities for Sarawak entrepreneurs in the oil and gas industries and educational scholarships, he elaborated.

“It is not fair for YB Chong Chieng Jen (Democratic Action Party Sarawak chairman) to just pour cold water on these ongoing negotiations. Actually, the state committees are going to look into specific areas where Petronas is requested to increase participation, and until a final decision is made, it’s wise for YB Chong to support what the CM and the state government are doing instead of just making a sweeping running down remark,” he said.

Abdul Karim was responding to Chong’s statement that Sarawak’s 10 per cent stake in MLNG 4 “is nothing to shout about”.

The Bandar Kuching member of parliament and Kota Sentosa assemblyman went on to say that the state has held 10 per cent interest in MLNG 2 and 3 since the 1990s, adding that the Chief Minister’s Office should be very well aware that a 10-per cent stake in MLNG 4 “is a totally separate matter to the 20 per cent oil and gas royalty for Sarawak”.

Abdul Karim: Better quality of life for all after independence


KUCHING: The people’s quality of life and standard of living have changed since Independence Day and we are progressing well as a nation, said Assistant Minister of Youth Development Datuk Abdul Karim Rahman Hamzah.


He said after gaining independence, Malaysia developed into a respected nation that enjoys political stability and social economic development.

“Compared to where we were before independence of the country, now our people had changed for a better society, living in the era of modernisation in communication and transport and living harmoniously in this multi-religious, multi-cultural and multi-racial society without fear as there are no more subversive threats from inside the country (period of communism),” he said before launching the ‘Kembara Merdeka Jalur Gemilang’ and ‘Kempen Kibar Jalur Gemilang 2014’ at Kuching Waterfront Amphitheatre.

“Our leaders who struggled for independence should be respected as they had succeeded in giving us sovereignty and we all especially our young people should thank previous leaders and we hope to continue their legacy so that this country will remain strong and a respected nation,” he added.

The Asajaya assemblyman said Sarawakians now can see development from Kuching division up to Limbang division which was non-existent before independence.

“This is because we also have been very tolerant with one another and respect each other and what we have in Sarawak should be an example for all Malaysians to follow irrespective of race, religion and culture,” he said.

He urged every household, company and the public sector to fly the Jalur Gemilang at their homes, business premises or offices to commemorate the Independence Day and to show the spirit of patriotism.

KUCHING: Youths aged between 15 and 40 years are urged to participate in the One Sarawak Youth Band Challenge 2014, the first such event to allow local bands to showcase their musical talent.

The event is jointly organised by Ministry of Social Development and Pending Recreational Club.

The venue is the respective town’s civic centre.

The closing date for registration is a week before the audition.

They hoped that a thorough investigation would be carried out soonest to solve the problem.

Assistant Minister of Public Health Datuk Dr Jerip Susil described the shooting as life-threatening and should be strongly condemned.

“We don’t know the motive of the shooting but definitely it is life-threatening and as such we hope the authorities concerned such as the police will carry out a thorough investigation and bring the culprit to book,” he said.

In the incident, one of the windows at the minister’s residence in Sibu was fired at using shotgun.

He said what was obvious was that the shooter was trying to put the law into his own hands and this was something most unwarranted for in a peaceful state like Sarawak.

Assistant Minister of Youth Development Datuk Abdul Karim Rahman Hamzah said he was shocked to hear a senior minister’s house being shot at.
Read more »
Posted by YB Karim says... at 9:14:00 am No comments:

Abdul Karim said it was high time that the government, through Malaysian Communications and Multimedia Commission (MCMC), regulate the usage of social media and register those who use it.

This was because some users of Facebook and other social media channels had been spewing racial and religious hatred through their postings.

“Through this way, the government can instill responsibility on these users and don’t let them use Facebook or other mode of cyber communications to create disharmony, unrest or racial incitement,” he said when contacted yesterday.

The Asajaya assemblyman was asked to comment on Communications and Multimedia Minister Datuk Seri Ahmad Shabery Cheek’s recent statement that the government would study whether it was necessary to bar access to Facebook following cases of abuse through the social website.

Ahmad Shabery said his ministry was conducting studies to gather public views on the matter.

Meanwhile, PKR Stampin branch secretary Desmond Kho, when contacted, said the Communications and Multimedia Ministry must take the studies seriously to determine whether the access to Facebook was detrimental to the society. 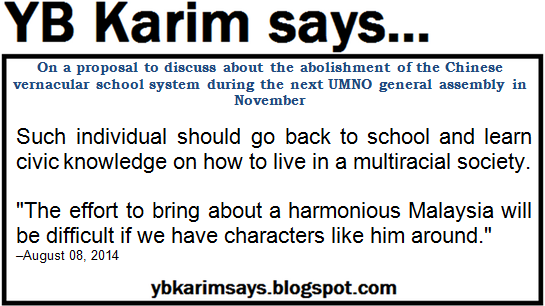 KUCHING: The proposal by Petaling Jaya Utara UMNO deputy division chief Mohamad Azli Mohamed Saad to discuss about the abolishment of the Chinese vernacular school system during the next UMNO general assembly in November was stupid and ridiculous.

Assistant Minister Youth Development Datuk Haji Abdul Karim Rahman Hamzah said such individual should go back to school and learn civic knowledge on how to live in a multiracial society.

KUCHING: Law enforcement agencies must buck up especially when it comes to upholding security in the state.

Assistant Minister of Youth Development Datuk Abdul Karim Rahman Hamzah made this reminder when commenting on the murder of two British medical students here early yesterday morning, which he described as unfortunate.


“I feel sad hearing of the murder of two young Caucasians at Jalan Abell this morning (yesterday) and wondered what was happening to our society now,” he said in a text message sent to The Borneo Post yesterday.

In view of this, he therefore urged the police not to rest on their laurels.


“Are our police and judiciary capable enough to address these problems or are they just being apathetic about what is happening? This latest incident brings shame to Sarawak and Malaysia.


“The law enforcement agencies must buck up. The society must cry out and show their concern and rid us of these despicable rascals who turn our street into their battlefield,” he stressed. 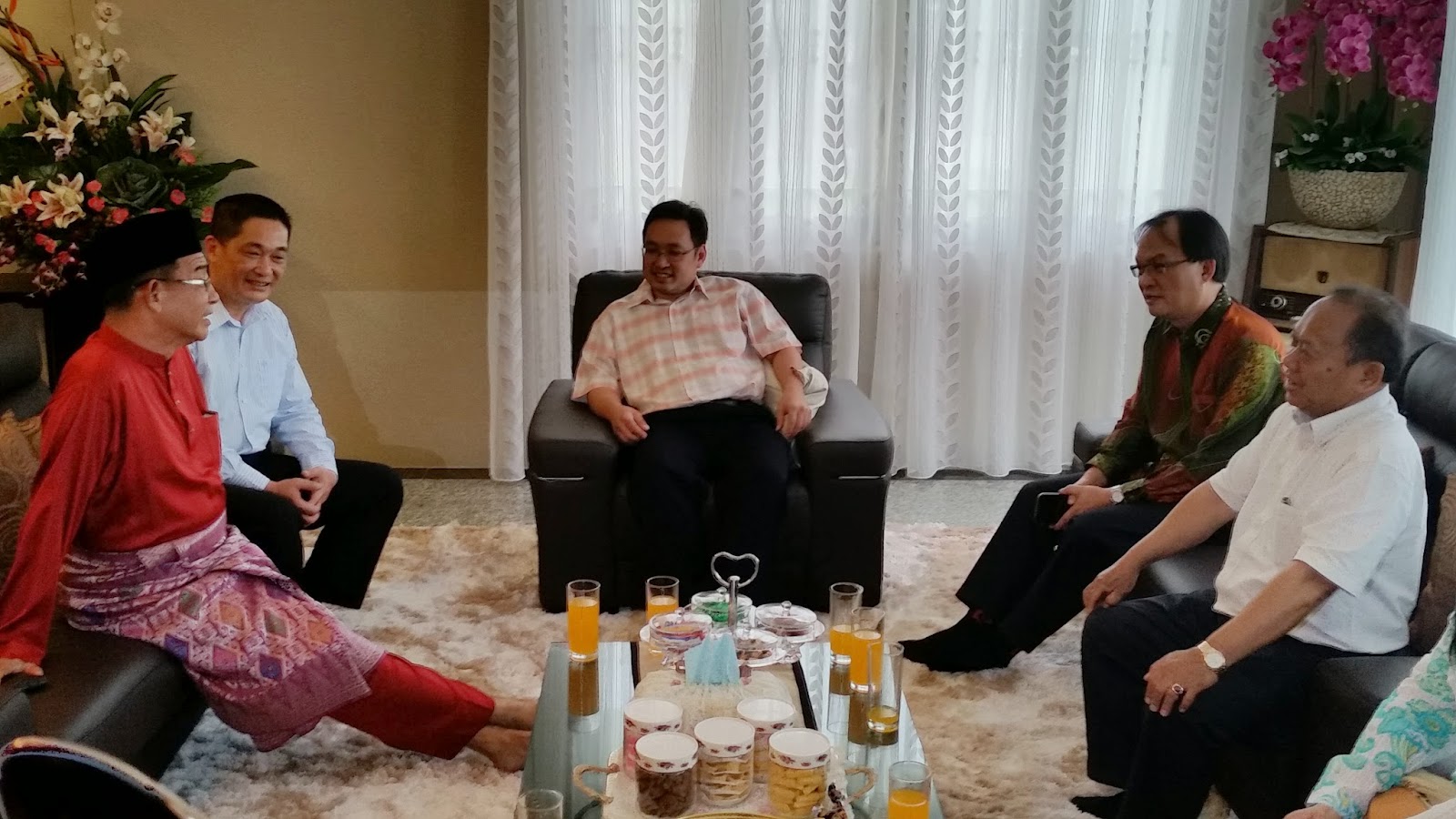 
Both delegations comprising over 20 people extended their festive greetings to Abdul Karim, who is also Asajaya assemblyman, at his residence at Jalan Astana in Petra Jaya.


Assistant Minister for Community Services Datuk Peter Nansian Ngusie was among the other guests.

Kuching may have a new Chinese school soon

KUCHING: The state government has earmarked a piece of land between Batu Kawa and Kota Sentosa for the construction of a Chinese medium school.

SIBU: Miri MP Michael Teo seems to be following the ‘law of the jungle’ in mulling to remove the Miri mayor over the waterfront issue.

PBB Supreme Council member Datuk Abdul Karim Rahman Hamzah in giving this opinion, questioned if there was anything under the law where the public could file a petition to remove a mayor.

Abdul Karim, who is Assistant Minister of Youth Development and Asajaya assemblyman, was commenting on Dr Teo’s statement that if mayor Lawrence Lai did not provide a good explanation as to why the parking lots were removed for an access road, they would resort to conduct a petition to have him removed.

“Dr Michael Teo must know how to live up to his stature as an elected parliamentarian.

“He is doing things to seek cheap publicity,” he told thesundaypost yesterday.

He recalled the other day Teo was seen manhandling some employees of a company doing some contract work.

“Well, he gets the publicity. Now, he wants to do a petition to remove the mayor.

KUCHING: Assistant Minister of Youth Development Datuk Abdul Karim Rahman Hamzah lashes out at a news portal for claiming that 97 per cent of people of Sarawak want their state to cede from Malaysia based on its survey.

He said statistical findings based on improper surveys could not be used as reflection of the people’s feeling.

“I was made to understand that this portal merely asked 100 people- 50 from Sarawak and 50 from Sabah and who are those 50 from Sarawak? If they were ask people from Asajaya,I think all of them will say ‘no’ to getting out of Malaysia,” he said when met at his Hari Raya Open House in Jalan Astana here yesterday.