Abdul Karim: Hike in pension rate not an election gimmick 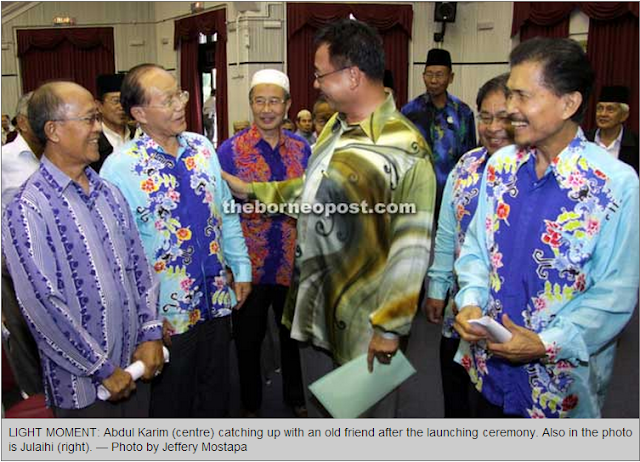 KUCHING: The recent increase in pension rate for government pensioners is not a gimmick to fish for votes, said Assistant Housing Minister Abdul Karim Rahman Hamzah.

Speaking at the opening of the 40th annual general meeting of Sarawak Pensioners Association (PPKS), he pointed out that pensioners now enjoy many benefits including the RM500 assistance under the 1Malaysia People’s Aid (BR1M) for households earning under RM3,000.

“All of these are not because the election is near,” he said. Abdul Karim was representing Housing Minister Datuk Amar Abang Johari Tun Openg for the function.

Government pensioners are set to receive a corresponding 7 to 13 per cent increase in their monthly pensions to be paid beginning April, with arrears from January this year. This is following the Prime Minister’s announcement of the improved Malaysian Remuneration System (SSM).

Abdul Karim also reminded pensioners, who had yet to apply for BR1M assistance, to do so before the deadline on March 31.

On another matter, he also advised pensioners to continue contributing positively to the society even though they were no longer serving in the government service.

“Treat retirement days as golden stage of your life, not as sunset stage,” he said.

Karim: Accusations of embezzlement to be taken seriously

Commenting on the controversy surrounding Green Ribbon Association Kuching (GRAK), he said that while he had yet to be briefed on the matter, it was morally wrong for members especially those holding positions to misuse allocations meant for the association’s coffers if such allegations were true.

“This is the first time I have heard of such financial irregularities in the association. If it really did happen in that association, this is a matter which we feel very sad about.

“As someone holding position in an association, there’s a level of honesty and accountability that you must fulfil. But if you misuse the money, I strongly feel that appropriate actions should be taken against you,” he told reporters yesterday after opening the Sarawak Pensioners Association’s (PPKS) 40th annual general meeting.

GRAK has been in the spotlight after four persons claiming to be GRAK members accused its president Law Kern Wan of financial mismanagement, power abuse and so on.

In his response, Law told a press conference on Tuesday that he was contemplating legal action against those defaming the association.

“However, we do not want any of those expressing their wish to assist but in the end come and ask for grants to move their election workforce or ask for a seat to contest.” Tuan Haji Abdul Karim Rahman Hamzah

Parti Rakyat Sarawak (PRS) president Tan Sri Dr James Jemut Masing said PPP’s readiness to assist the state BN without asking for anything in return is something that should be practised by all BN component parties.

“We are happy to know that PPP is ready to assist BN and Sarawak and that is the spirit that we should all have,” he said when contacted yesterday.

“We will not stop anyone from stepping in to assist. What we hope is that they are sincere with their intentions.

“However, we do not want any of those expressing their wish to assist but in the end come and ask for grants to move their election workforce or ask for a seat to contest,” he said.

PPP Sarawak branch chairman John Lau had said on Wednesday it would be the party’s priority to assist BN component parties and that it did not mean PPP wanted to contest in a seat.

KUCHING: The government is working hard to tailor programmes and agendas to suit the interests of youth, who make up the highest percentage of voters.

Youth Development Assistant Minister Abdul Karim Rahman Hamzah said the government is closely monitoring the needs of the youth to ensure the group was not left behind in terms of development and government agendas.

“We are keen to ensure that they are not left behind. They make a huge difference in terms of ideology as their thinking are different to the older generations,” said Karim.

He said this to reporters after participating in the ‘Senam Seni Sihat 1Malaysia’ at Kuching Waterfront yesterday.

In order to lure the younger generations to register as voters, it is the duty of both the government component parties and the opposition parties to conduct voter registration to ensure those eligible to vote exercise their responsibility as Malaysian citizens.

Staff of government agencies such as the Information Department, Malaysia Communication and Multimedia Commission, Pos Malaysia Bhd and the National Film Sarawak branch took part in the programme yesterday.

The event will be held monthly on every third Saturday at Kuching Waterfront.

Resettled villagers still hopeful of being given free houses

KUCHING: Residents of the four villages affected by the RM310 million Bengoh dam still hope that they will be given free houses at the Bengoh Resettlement Scheme (BRS) even as there is no confirmation on the matter.

During a ground-breaking ceremony of the housing project site near Kampung Semadang about 50km from here on Saturday, there was no official announcement stating that the affected 204 families would get the houses free.

“There was no decision made yet on the matter (free houses) because our main focus now is to build the 204 units of houses and install other basic infrastructure,” said Second Resource Planning and Environment Minister Datuk Awang Tengah Ali Hassan, who officiated at the event.
Read more »
Posted by YB Karim says... at 3:25:00 am No comments:

Galeri: Earth-breaking ceremony for the construction of 204 units of Rumah Mesra Rakyat (RMR) in Bengoh

KUCHING: RMR at the new Bengoh resettlement area would have a different design with three bedrooms sited on a quarter-acre of land.

This was revealed by the Assistant Minister of Housing Abdul Karim Hamzah when met during and earth-breaking ceremony of the resettlement area along Jalan Semandanh-Skio, about 40km from here yesterday.

“The design of the houses is to meet the demand and request of the affected villagers,” he said, adding that it was also to provide convenience to the people.

Abdul Karim said he hoped the houses would be built to a high quality to ensure house owners are comfortable.

A recreational centre, chapels and community halls would also be available in the resettlement area thanks to Naim Engineering Sdn Bhd, which would provide the facilities under its corporate social responsibility (CSR) initiative.

Meanwhile the villagers of the new resettlement have been asked by the Deputy Tourism Minister Datuk Dr James Dawos Mamit to consider signing up for the homestay programme.