Karim to Yii: You living on another planet?

Abdul Karim Rahman Hamzah says DAP's Bandar Kuching candidate Kelvin Yii, who claimed there’s a lack of development in the state, should go to the ground and see for himself before talking. 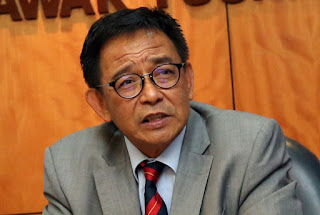 PETALING JAYA: A Sarawak minister has criticised DAP’s Dr Kelvin Yii for claiming there is a lack of development in the state, saying the Bandar Kuching hopeful’s “pathetic knowledge” shows he must be “living on another planet”.

All round applause for Pandelela

She combined with Cheong Jun Hoong to win the women’s 10m synchronised platform gold medal at the Optus Aquatic Centre with 328.08 points.

In fact, he added, all political parties had been campaigning for months or even years for the election.

“This (11 days campaign) is sufficient because as it is, campaigning by all political parties has started months or even years ago…so it’s good that Election Commission (EC) set aside only 11 days for final campaigning,” Abdul Karim, who is Minister of Tourism, Arts, Culture, Youth and Sports, pointed out.

‘Request for jet airliners for Sibu-KK route to be studied’

SIBU: The Ministry of Tourism, Arts, Culture, Youth and Sports is seriously looking into the request for a Sibu-Kota Kinabalu sector to be serviced by jet airliners.

Its minister Datuk Abdul Karim Rahman Hamzah affirmed the matter, while adding that he hopes to resolve the matter soon.


KUCHING: The second edition of Rainforest Fringe Festival (RFF) will be held here from July 6 to 15.

According to Minister of Tourism, Arts, Youth and Sports Datuk Abdul Karim Rahman Hamzah, there would be more showcases of cultural, contemporary, and traditional events which are representative of the state’s exciting and complex nature, and its many indigenous groups.

He said RFF is a prelude to the Rainforest World Music Festival which will be held from July 13 to 15 at Sarawak Cultural Village near here.

SIBU: The increase in the number of drug addicts nationwide remains a sad situation, despite Malaysia having one of the toughest laws to tackle this menace.

In view of this, the Tourism, Arts, Culture, Youth and Sports Minister Datuk Abdul Karim Rahman Hamzah believed that the government – especially those entrusted to address these problems – must do ‘some soul-searching on where things had gone wrong’.

The Borneo Post reported today, Abdul Karim, who is also National Association for Prevention of Drugs (Pemadam) Sarawak chairman, questioned: “Are the enforcement agencies inefficient in addressing this menace?
Read more »
Posted by YB Karim says... at 9:14:00 am No comments:

Sarawak minister says former PM only wanted to 'squeeze' resources from the Borneo states to support his projects in the peninsula.

PETALING JAYA: Dr Mahathir Mohamad has received more flak over his remarks on the slow progress in Sabah and Sarawak, with Sarawak minister Abdul Karim Rahman Hamzah accusing the former prime minister of treating the Borneo states like “stepchildren” throughout his 22 years in power.

Mahathir, who was the country’s longest-serving prime minister, had attributed the slower progress in the two states compared with the peninsula to “greedy” politicians and complacent people.

Speaking to FMT, however, Karim said Mahathir only wanted to “squeeze” resources from the states to support his “mega projects” in Peninsular Malaysia.

According to him, the event is an international event that can help promote and showcase Sarawak’s culture to neighbouring state Sabah, federal territory of Labuan, Brunei and Indonesian provinces of North, South, East, West and Central Kalimantan through big bike activities.

He also hoped that Sarawakians will support the event which kicks off on April 6.

Sarawak can capitalise on exotic tourism attractions in Borneo — Minister

KUCHING: Tourists these days are looking for fresh and unique experiences to remember, in that more and more of them are very knowledgeable and well-travelled.

In this regard, Tourism, Arts, Culture, Youth and Sports Minister Datuk Abdul Karim Rahman Hamzah highlights Borneo as an exotic place to foreigners, adding that Sarawak would want to capitalise on this.

He was speaking to reporters yesterday after launching the ‘Sarawak Borneo Cross Country Rally 2018’, scheduled to take place from Aug 3 to 14 this year.

KUCHING: The state government will always be there to assist in training future champion swimmers who can go on to represent their club or the state.

The assurance came from Tourism, Arts, Culture, Youth and Sports Minister Datuk Abdul Karim Rahman Hamzah who added that Sarawak should be able to put up a good swimming team with the dedication of coaches, parents and young swimmers themselves.

He was speaking at the closing of the Power Aquatics Swimming Club’s (PASC) 3rd Inter-Primary School Swimming Competition for schools in Kuching and Kota Samarahan held at the Pandelela Rinong Aquatics Centre yesterday.

KUCHING: Over 80 big bikers will congregate at SugarBun@Icom Square this morning (Sunday) at 9am for the official launch of the Sarawak Borneo Cross Country Rally 2018 by Minister for Tourism, Arts, Youth and Sports Datuk Abdul Karim Rahman Hamzah.

The event will be flagged off in Kota Kinabalu and will pass through Brunei, Miri, Bintulu, Sibu, Kuching, Pontianak, Sinkawang and ending in Kuching.