Galeri: A press conference on the dissolution of Sarawak DUN on April 11th

KUCHING: Two PBB leaders Datuk Abdul Karim Rahman Hamzah and Abdullah Saidol shot down attempts by the state DAP to make the coming state election a referendum against the Goods and Services Tax (GST) and described it as ‘desperate’.

Abdul Karim, who is also PBB supreme council member and Asajaya assemblyman, said such attempt showed DAP was running out of issues against Barisan Nasional (BN) for the state election.

“The GST is a tax imposed by the federal government, whereas an election is a venue for the ‘rakyat’ (people) to choose who should be their elected representative or YB and, which party should be the government for the next five years.

“By proposing GST as the ‘referendum’ to gauge acceptance and popularity shows how desperate DAP is in trying to win votes. Next, probably they would say the recent heavy rain and flooding are because of BN government’s inability to stop the rain,” said the Assistant Minister of Housing and Assistant Minister of Youth Development.

“I am sure the ‘rakyat’ are not easily influenced by this cheap tactic,” he added.

He explained GST, introduced in April 1 last year, had helped the government tremendously especially when the price of oil and gas had gone down so low and affected the country’s development plans.

“We are lucky that Malaysia has good leaders that could foresee this coming and introduced GST as an alternative. Even Brunei and other oil producing countries are feeling the pinch from this low oil price and Malaysia is not spared.

Email ThisBlogThis!Share to TwitterShare to FacebookShare to Pinterest
Labels: Takziah

Expressing regret over the matter, he suggested that the organiser should have been more professional in organising an event of this magnitude.

“They should not have let the event be abruptly cancelled and causing so much inconvenience to participating teams, and supporting department and agencies.

“How could they keep silent till the end without informing participating teams that the event could not proceed. Surely, they would know about their financial standing months ago and could make a decision whether to go ahead with the race or not,” Abdul Karim, who is Asajaya assemblyman, added.

Though the sports of cycling in Sarawak would not be affected, the image of Malaysia and Sarawak would be tainted by dubious organisers like this, he opined.

Meanwhile, Bernama has reported that the Malaysian National Cycling Federation (MNCF) was ready to foot the transportation bill of teams involved in the Tour of Sarawak (ToS) 2016 due to the cancellation of the tour at the eleventh hour.

Adenan praised for going beyond rhetoric

PETALING JAYA: Sarawak Chief Minister Adenan Satem is laying the foundations for a sustainable Sarawak, driven by a skilled and knowledgeable society rather than being driven by natural resources.

In an interview with FMT, Parti Pesaka Bumiputra (PBB) Supreme Council member Abdul Karim Rahman Hamzah explained that Adenan’s policies and decisions pertaining to education and language were aimed at transforming the state so that its growth would be less dependent on its rich natural resources.

“Tok Nan wants to do more than manage the state,” he said. “He wants to ensure its future is in good hands long after he has retired.

“He knows that through better and firmer education policies, Sarawak stands to gain from having a highly skilled workforce capable of excelling not only in the state but also globally.”

Karim, the assemblyman for Asajaya and Sarawak’s Assistant Housing Minister, pointed out that many of Adenan’s announcements on education had been translated into policies that were being implemented.

He said Adenan’s policy of making English the state’s second official language and his persistence in encouraging Sarawakians to master the language was a major indication of how serious he was to develop the state’s human capital.

“Tok Nan has underlined the importance of English as the global language of commerce, science, technology and more,” he said. 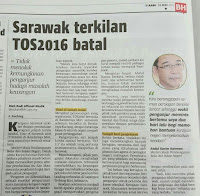 KUCHING: The Sarawak government has expressed its disappointment over the fiasco surrounding the planned ‘Tour of Sarawak 2016’ international cycling championship event, which has been dogged by controversy.

Assistant State Social Development Minister Datuk Abdul Karim Rahman Hamzah said the state government was also embarrassed by the cancellation of the event, which was linked to the lack of funding by the organiser of the championship.

Karim said the event organisers should be more responsible and that they owe the state government an explanation over the disastrous management of the event.

“I am surprised myself that the event has got into this chaotic end. I am sad that it could not proceed as planned.

“I am unaware of what had happened (which had led to the cancellation of the event) but I believe it is related to financing.

“The organiser should have been more responsible. So much inconvenience has been caused to the numerous teams whose cyclists had trained for the event, only to be frustrated by it being abruptly cancelled.

“The state Government and state Ministry of Social Development are embarrassed by this last-minute cancellation, which was totally beyond our control,” Karim told the New Straits Times.

“Corporate sector’s involvement in sports development could help produce more good sportsmen and sportswomen in fields such as cycling and swimming.

“We assure you that the government would still be providing assistance, as we encourage more sponsor from the corporate sector to come forward,” he told the media after performing the ‘Corbusier-Samudra Hotel-Polygon Team Presentation’ at Samudra Hotel here yesterday.

Abdul Karim said having partnerships with the corporate sector could reap in lots of benefits such as funding for development works, as well as accomplishing shared goals. He expressed his appreciation and gratitude to Samudra Hotel and Polygon for sponsoring Team Corbusier — a local cycling group that will be taking part in this year’s road-racing season.

The team has already established its presence in the state’s cycling fraternity, strengthened by its standing as the only local club to have worn the coveted Yellow Jersey at Union Cycliste Internationale (UCI)-run Tour of Borneo 2013.

The Asajaya assemblyman lambasted Chong for saying that the declaration was a good development which would lead to a breakup of BN.

“BN supporters in Sarawak must always remember this when they go voting soon. DAP is only out to bring down the government, be it the BN state government or the federal government. Nothing that CM Adenan (Datuk Patinggi Tan Sri Adenan Satem) did matter to them,” said Abdul Karim.

He added: “They even go to the extent of saying that a vote for Adenan is a vote for Najib.”

Ba Kelalan assemblyman Baru Bian too has called for the declaration to be given a chance to be heard and understood.

The state PKR chairman said the signing of the declaration should be seen as a positive step in the fight to restore the dignity of the country and save it from absolute ruination by the current government.

Baru was reported to have said he wholly supported the demands made in the declaration. 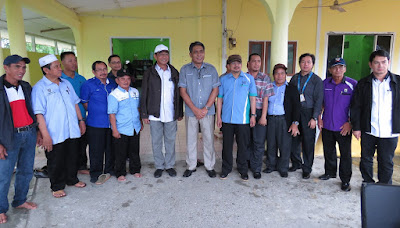 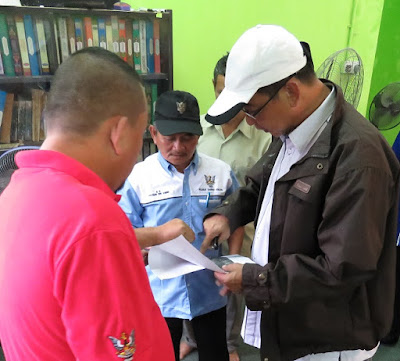 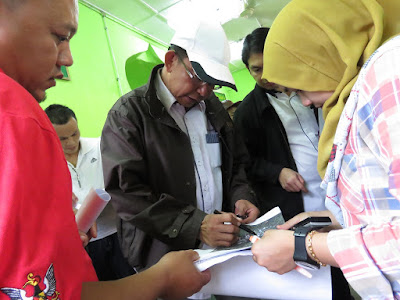 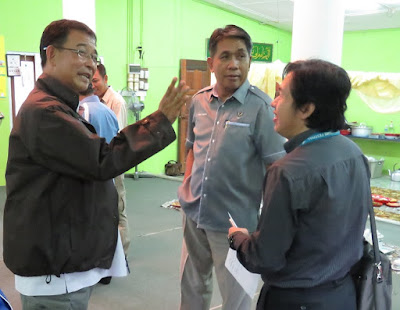 KUCHING: The anti-Najib movement led by former prime minister Tun Dr Mahathir Mohamad and opposition leaders has been described as an unfortunate episode in the country by Assistant Minister of Housing Datuk Abdul Karim Rahman Hamzah.

“It is out of my wildest dream that the ‘Hunter’ and the ‘Hunted’ could sit down and be in the same ‘Team’.

“How juicy can Malaysia’s political scene be? It sounds a bit like a Hindustani movie, however, this time it is for real,” he told The Borneo Post when contacted yesterday.

“Personally I think Tun Mahathir should stay ‘above board’ and avoid politics, he has his days. As such, he should just be a senior statesman and a person whom the present leaders can seek for his views and opinion for the good of the nation. It’s just unfortunate he chooses to be directly involved in such movement.”

Abdul Karim opined that Mahathir should respect the mandate that the ‘rakyat’ had given Najib in the 13th General Election (GE13) and leave the present administration alone.

“He has poked his nose at former prime minister Tun Abdullah Ahmad Badawi and now he is doing the same against current prime minister Datuk Seri Najib Tun Razak. Does he think he is the only capable prime minister?” Abdul Karim questioned.

On another development, Abdul Karim who is also the Assistant Minister of Youth Development (Urban) said the State Barisan Nasional (BN) is not taking the forthcoming state election lightly despite being confident of a sure win. 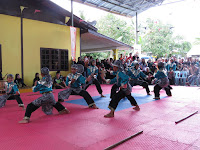 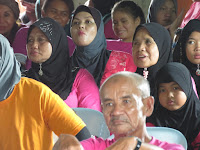 According to him, the association was not invited to the opening ceremony in the first place.

“I wish to inform that the state Pemadam and its Miri branch were never informed nor invited to this new rehabilitation centre ceremony and I am unaware whether the police or AADK were invited either,” he said in a statement yesterday.

Lee last Saturday expressed his disappointment at the no-show by police, AADK and Pemadam at the opening of Sarawak Kenosis Home – a drug rehabilitation centre for men – at Tanjong Lobang in Miri.

Abdul Karim, who is also Assistant Minister of Youth Development (Urban Areas), said Lee should have checked on the invite with the organiser or with him in his capacity as assistant minister at the Ministry of Social Development on Pemadam and AADK before making the statement which was uncalled for.

“Furthermore, Datuk Lee should also check on the procedure and administrative arrangement for the setting up of a private drug rehabilitation centre.