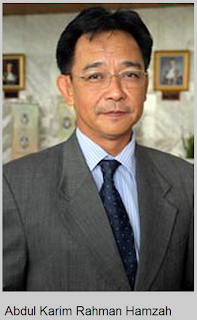 KUCHING: Sarawak is certain to become haywire if the opposition comes to power in the coming state election.

Chief Political Secretary to the Chief Minister Abdul Karim Rahman Hamzah said this bleak scenario was possible because the component parties within Pakatan Rakyat (PR) were presently trying to outdo each other in order to become the dominant opposition party.

Their focus is not on serving the interest of the rakyat.

“As the election gets nearer, you can see the real colours of the Opposition leaders. They are power crazy and totally do not have the interest of the rakyat in their agenda,” Abdul Karim said when contacted yesterday.

He said all of them were presently scrambling to contest “like vultures going after their prey”, with all their earlier mutual understanding cast aside.

“I can’t imagine how haywire it would be if they come into power. So, vote wisely. Don’t give your vote to the chaotic opposition parties,” he urged.

Karim was asked to comment on the breakdown of seat negotiation between the DAP and PKR as announced by state DAP secretary Chong Chieng Jen last Thursday.

Abdul Karim: I’m not moving away from Asajaya

KUCHING: Chief political secretary to the Chief Minister Abdul Karim Rahman Hamzah has rubbished any suggestions that he would move away from Asajaya in the coming state election.

He said he was still comfortable at Asajaya and had no intention to stand in another seat unless instructed by Parti Pesaka Bumiputera Bersatu (PBB) and Barisan Nasional (BN) top leadership.

“At the moment, I am still comfortable at Asajaya. If re-nominated in the state election, hopefully I will stay at ‘kawasan lama’ (referring to Asajaya),” he told reporters after the Sarawak Cup Paintball Tournament 2011 yesterday.

Rumours had it that Karim, also a PBB supreme council member, would be nominated to stand in either Demak Laut or Sadong Jaya where incumbents Datuk Dr Abang Rauf Abang Zen and Datuk Wan Wahab Wan Sanusi had publicly announced their decisions not to seek re-election.

It is speculated that PKR would field Arip Ameran, a syariah lawyer, to take on Karim this time.

On a related matter, Karim hoped Sarawakians would use their wise judgment during the election. “Dissolution of DUN (State Legislative Assembly) is tomorrow (Monday). Insya Allah, the election will be in April.”

KUCHING: Do it ‘Sarawak Style’, chief political secretary to the Chief Minister, Abdul Karim Rahman Hamzah said when urging everyone to be vigilant in the coming state election.

“Sarawak style is a bit different from West Malaysia where candidates and supporters from all parties display good manners when holding an election. A candidate can also visit and shake hands with opposing party supporters,” Karim said when met at a press conference yesterday.

Karim disapproved of rowdy behaviour during campaigning and polling day. He said what was important was for everyone to carry out their role and not throw baseless accusations against one another.

On the challenge posed by SNAP, Karim said its fielding of 16 candidates was not a big challenge to Barisan Nasional.

Karim said BN would not rest on its laurels when it comes to facing challenges during election time.

He said the movement had done a justified act because its members were trying to fight an evil cause aimed at creating disunity among the ‘rakyat’.

“It is my hope that Malaysian Communication and Multimedia Commission (MCMC), Home Ministry (KDN) and police would investigate and (subsequently) take action against those involved,” he said when met during the BN Convention at the Borneo Convention Centre Kuching (BCCK) yesterday.

He pointed out that all parties should be united in protecting the racial harmony that is being enjoyed by all.

Pandi, when interviewed at the police station, said the wing was responding to a statement made by the Deputy Minister of Information, Communication and Culture Datuk Joseph Salang that MCMC could take action against the radio station if a report were lodged with the police.

“The rakyat feel uneasy (with the radio station) because they know it is operating illegally. It is not good for the country because Malaysia is multi-racial and its existence hinges on mutual respect among its citizens,” said Pandi.