Getting excited with Sarawak Day celebrations on July 22

Our local folks are getting excited with the forthcoming Sarawak Day celebration which is on July 22 and a small do is being organised at our State Assembly Building (DUN) where it will televised via Facebook and YouTube channels by Unit Komunikasi Awam Sarawak or UKAS.

According to the organizing committee, this year's celebration is done on modest scale in view of the present Covid19 situation and it is also subjected to the strict standard operating procedures (SOP) which stipulates that only 100 guests were invited to attend.

All of us had been cordially invited to follow this live broadcast to support the celebration of this historic event because July 22 is regarded as important because in 2016, our former Chief Minister of Sarawak, the late Tan Sri Adenan Satem, had declared it a public holiday to commemorate the history of Sarawak which was free from colonial rule.

It is also to commemorate the date when the last British Governor, Sir Alexander Waddell had symbolically handed over the administration of the state to the local people in 1963. Together we are celebrating Sarawak Day because it is a historic event for Sarawakians where all of us are taking time to reflect the sacrifices of all the past leaders and freedom fighters of our beloved state.

Unity among multi-racial and multi-religious communities in Sarawak is important in creating a peaceful, stable state and nation. Efforts to unite the people through the strengthening of racial integration in our state and country must also be maintained to safeguard the well-being of future generations.

In the context of Sarawak, the commitment to pursue this unity agenda is very important to ensure development and progress because we had always given the priority to sustain the well-being and sustainable development of society. Together we continue to stand firm, united and to move forward. #kitangitu #sarawak #kitajagakita 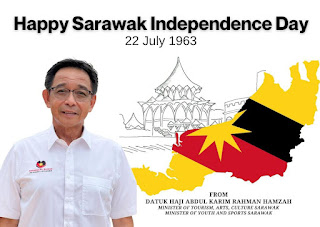 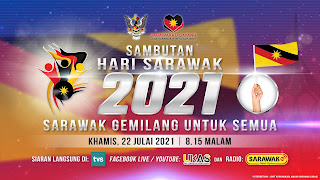