Commenting on the resignation of YB Larry Sng from PKR

I thanked our local media friends who asked my views on the recent decision made by Julau Member of Parliament, YB Larry Sng  who resigned from Parti Keadilan Rakyat (PKR) and has openly backed the Perikatan Nasional (PN) government. I viewed it as a right move by the former PKR Sarawak chairman is a mature politician and was able to properly read the current political situation.

YB Larry has been around for many years and he had entered politics the same year as myself in 2001. He has been an elected representative for 20 years and surely he must be able to read the situation, the people’s feelings as well as looking into the administration of the current government in terms of the state or the national level.

Apart from that, he was a former assistant minister in our government and closely watches the administration of the  Sarawak state and federal governments,

I believe that for him to exit from PKR and give his support to Prime Minister Tan Sri Muhyiddin Yassin shows his confidence on Muhyiddin’s leadership, and his belief on what is done by PN under his leadership is the best or else he would not have made that kind of decision.

I have mentioned that YB Larry might have stayed in PKR if he felt that the leaders from Pakatan Harapan (PH) could win in the elections and maybe even do better than Muhyiddin.

He had mentioned that the decision to resign from PKR had received the blessing of his constituents, adding that there had been too much political instability over the past one year which had damaged the country’s economy and the people’s well-being.

The decision made can be viewed as the best way forward was to put politics aside towards stabilising and rebuilding Malaysia together. For the record, YB Larry became Sarawak’s PKR chief after Selangau MP, YB Baru Bian had exited the party after the fall of the Pakatan Harapan government in February last year.

I told our media friends that I would not want to speculate if  YB Larry would contest in the coming general election on Gabungan Parti Sarawak (GPS) ticket should he join any of its component parties.

Kudos to YB Larry who said there was too much time already being wasted in politicking and bickering while the local folks suffer, citing in his Julau constituency of Julau, the poorest in the country, where the people were suffering because of the economic impact of the pandemic, loss of jobs and income from low commodity prices. 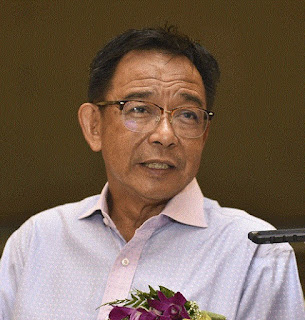