There was a lot of talk on the recent issue of Parti Pribumi Bersatu Malaysia (BERSATU) standing in our state election under Gabungan Parti Sarawak (GPS) ticket but as far as we are concerned there is no room for them to do so be­cause the state coali­tion had already iden­ti­fied its can­di­dates to stand in all the 82 seats.

Speaking as the Vice President of Parti Pe­saka Bu­mi­put­era Ber­satu (PBB), I have mentioned to our media friends on April 12 during a press conference held at my office is that in or­der for a can­di­date to be en­dorsed by GPS for the elec­tion, he or she must come from one of the four com­po­nent par­ties of the coali­tion namely PBB, Sarawak United Peo­ple’s Party (SUPP), Parti Rakyat Sarawak (PRS) and Pro­gres­sive Demo­cratic Party (PDP).

GPS has already iden­ti­fied its can­di­dates in all 82 seats for the next state elec­tion which means that all of th­ese can­di­dates are from GPS. Where BERSATU comes in on this, it’s hard for me to say. When we cross the bridge, we will de­cide on this.

This issue had surfaced after BERSATU's Supreme Coun­cil mem­ber, Datuk Zu­raida Ka­marud­din’s state­ment on April 11, that the Semenanjung-based party will be plac­ing its can­di­date to stand in the coming 12th Sarawak's elec­tion un­der the GPS ticket.

If there were can­di­dates from BERSATU and GPS con­test­ing in the state elec­tion, it may cause con­fu­sion among our local voters. If there are dual party mem­bers, say one is from Ber­satu and one is from GPS, that can be a lit­tle bit con­fus­ing. They have to make up their mind.

Nev­er­the­less, I have mentioned GPS would ad­dress this is­sue prop­erly be­cause the coali­tion sup­ports Perikatan Na­sional (PN) at the Fed­eral level. PN was es­tab­lished for the sake of sta­bil­ity with the sup­port of GPS. We also hope that PN will re­cip­ro­cate when we are fac­ing our state elec­tion. At present, ev­ery­body knows... it’s ac­knowl­edged by PN and Ber­satu that they sup­port GPS as the gov­ern­ment for Sarawak. 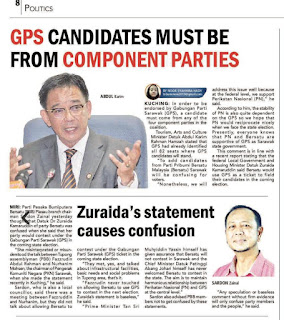